Review: No Peace for the Damned - Megan Powell 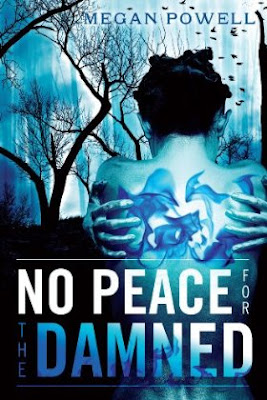 Magnolia Kelch is no stranger to pain. Beautiful and powerful, she’s spent her entire life at the mercy of her sadistic father and the rest of the Kelch clan, who have tortured her and tested the limits of her powers. After one particularly heinous night that leaves Magnolia nearly dead, she finally sees her chance for escape…

But this first taste of freedom is short-lived when she collides with Thirteen, head of the Network — a secret organisation dedicated to fighting supernatural criminals — who recruits her into the group. Even as she’s coming to grips with this new life and the horrific memories that still haunt her, she’s conflicted by her growing attraction to fellow team member Theo and the emergence of new, untested abilities. After months of gruelling training, her loyalty to the team is tested when she learns her target is the Network’s most wanted: the Kelch family.

Revenge may course through her veins, but so does the blood of the Kelches. And opposing her family may cost her the thing she treasures most. After all, Magnolia is still a Kelch. And the Kelch are damned.

Review:
Magnolia Kelch has spent her whole life being tortured by her sadistic father, uncles and brothers. Ever since they discovered that she is impossible to kill they have subjected her to horrific experiments and never ending pain. When she finally manages to escape from the family estate she is rescued by Thirteen, leader of the Network, an organisation created to fight against supernatural terrorists. The Network's biggest target is the Kelch family and Magnolia has vital information that could help them finally bring down one of the most dangerous supernatural crime families. But can Magnolia bring herself to turn against her family even after everything they have done for her and even if she does will the Network trust the information she gives them?

I love urban fantasy so was keen to try Megan Powell's debut novel No Rest for the Damned. This is the first book in a new series although no release date has been confirmed for future books at this time. This wasn't a perfect start to the series but it definitely has potential and I will be reading the next book to see what happens to Magnolia next. The story is quite dark in places and the flashbacks we see of the torture that Magnolia was put through was quite disturbing, this isn't a book I'd recommend to the particularly squeamish.

I found the abilities that Magnolia and her family have interesting (I always like reading about psychic gifts) but most of them are powers I have come across before so they don't stand out as particularly unusual. I would have liked more of an explanation about how they came to have these gifts and also about how many other people in the world are also supernaturals, this was never really made clear and it would have added an extra layer to the story if we had been given more information.

Magnolia herself was likeable enough but I found her frustrating at times. She showed her amazing ability to kick ass occasionally but there were times when I felt she was a bit too quick to accept orders from members of the Network. Considering her history with her family I expected her to be either more into getting revenge or alternatively less willing to face them - she seemed to sway between one and the other and I felt she would have had a much firmer opinion about what she wanted to do. I also hoped we would be offered more of an explanation for the fact that she constantly had a bottle of whisky in her hands and couldn't go more than two minutes without drinking from it. Towards the end of the book it was implied that she drank to drown out the voices she could hear in her head (she was a powerful psychic who could read the minds of everyone in a rather large area around her). This made a lot of sense but I would have preferred if the explanation had come sooner and was in a bit more detail - it would have made me more sympathetic with Magnolia right from the beginning.

I like the idea of the Network and the characters we were introduced to have potential but I never really felt like we got to know any of them well enough, there were too many people for so little page time and I had trouble remembering who was who. If you can't remember who a character is it is hard to care much about what is happening to them and that was one of the problems I had. I do think that the group could be really good once we get to know them better though. I am interested to find out more about Thirteen, he often thinks of his daughter when he looks at Magnolia but when he sees her with Theo he acts more like a jealous potential boyfriend which I found slightly disturbing. I'm hoping that things will become clearer regarding their relationship in future books. I found it hard to become invested in the romance between Magnolia and Theo because the attraction between them has a supernatural element to it that is never explained. I am curious to see how that plays out in the future but I hope the series doesn't change to focus mainly on the romance.

Overall I feel that No Peace for the Damned didn't quite live up to it's potential but was far from a bad book. The book definitely had a readable quality that made it a page turner and I read it in just two sittings. Considering this is a debut novel I have confidence that the series will only get better with each book and I'm definitely planning on reading the next instalment to see if I'm correct.