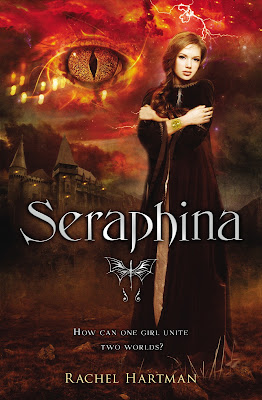 Can one girl unite two worlds?

A fragile peace has been achieved in the realm of Goredd, and dragons and humans live together in harmony.

But the truce is shattered when a royal prince is brutally murdered - could dragons be to blame?

Seraphina, a talented court musician harbouring secrets of her own, is drawn into the investigation and uncovers a darker plot, one that threatens the very existence of the kingdom. And soon her own life is in terrible danger as she fights to hide the secret behind her amazing gift . . .

Seraphina Series:
The Audtion (Free prequel short story that can be read online here)
Seraphina
Titles and release dates for further books in the series are to be confirmed

Review:
For the last 40 years there has been an uneasy truce between the humans and dragons, there may not be much trust between the two but at least they are no longer openly at war. Dragons who have chosen to take a human form are able to live in the towns but must wear a bell so that they can be easily identified. As the 40th anniversary of the peace treaty approaches the celebrations and peace itself is put in jeopardy by the murder of the crown prince. With suspicion falling on the dragons trouble is brewing in Goredd but who is really behind the plot and can Seraphina figure out a way to stop them starting another war?

Seraphina has spent her entire life hiding her talents and trying not to draw attention to herself at the insistence of her father. Her family has a dark secret, one that could lose them everything if it is revealed in court, so she has to remain constantly on guard so that no one discovers it. Working as a musician at the court she finds herself drawn into the intrigue surrounding the murder of prince Rupert. She is worried about how the end of the peace treaty would effect her teacher a dragon called Orma and this makes her determined to figure out what is really going on. With the help of Captain Riggs her investigation drags her into a complicated plot and it isn't going to be easy for them to keep the peace between humans and dragons. But Seraphina is smart and resilient and although she has a secret that must be kept she also has abilities that will help her solve the mystery.

I have a bit of an obsession with dragons so as soon as I see a book about them I want to read it. What I loved most about Seraphina was the way the dragons are so different to the human characters. Dragons come across as cold and unfeeling, they believe any kind of emotion is an illness and are monitored closely for any symptoms they may show. It is strictly forbidden to show love for another and the consequences for breaking the rules are severe. Collecting gold has been banned and I loved how the younger generation of dragons have taken to hoarding knowledge instead of treasure. They are obsessed with learning and I laughed out loud at the way Orma liked to gather his books into piles and sit on them!

Rachel Hartman has created a detailed world with unique and interesting mythology. Seraphina is full of well drawn characters, mystery, suspense, political intrigue and a hint of romance. I also appreciated the fact that we weren't left with a killer cliffhanger. I still have questions I want to know the answer to and I'll still immediately pick up the sequel when it is released but I wasn't left feeling like I'd only read half a book. I will definitely be recommending this story to fantasy fans, particularly those who like dragons.

Source: Initially received from publisher via NetGalley but I also received a print copy from RHCB in exchange for an honest review