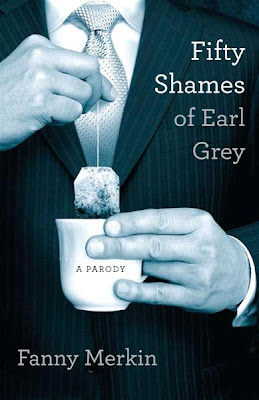 Young, rich and handsome tycoon Earl Grey has a dirty secret. He brings Anna, a naive college student, past the waterbed, the strobe light inside his 'Room of Doom' and into his twisted world of, well, mostly naughty dialogue and light spanking. Anna is enthralled - after all he's rich, and has a habit of buying every company she has ever worked for in an attempt to get close to her. But on the flipside he's a moody bastard whose fifty shames constantly threatens to overwhelm her. Can Earl Grey and Anna ever have a normal life together? Or will his dark desires, love of BDSM (Bards, Dragons, Sorcery, Magick) and constant smirking drive her over the edge?

Review:
I'm a huge fan of the Fifty Shades series but as much as I loved the books I also love to hate them - there are so many things about the series that irritate me that I laughed a lot while reading the books. So of course as soon as I heard about the parody Fifty Shames of Earl Grey by Fanny Merkin (aka Andrew Shaffer) I wanted to read it. The author has certainly put his own unique twist on the story that we are all now so familiar with and he does a great job of highlighting the things I found ridiculous about the original books. I love the way he has also managed to blend in some jokes about the Twilight series considering this is a parody of a story that started out as Twilight fan fiction.

I think anyone who loved the series will find themselves amused by Fifty Shames of Earl Grey, especially if you are open enough to accept the problems with the original books. Anyone who hated the books will probably adore this though as it will point out all of the things you didn't like about the book in the first place but in a much more humorous way. I don't recommend reading this unless you've read at least the first Fifty Shades book though as I don't think a lot of the jokes would make as much sense if you're not familiar with the characters and storyline.

I enjoyed Fifty Shames of Earl Grey and I did laugh out loud a couple of times while reading but I have to say there were a few points when I felt the book was trying just a little too hard to be funny. It was still a quick, amusing read though and one I'd recommend to anyone who wants to laugh at the phenomena that Fifty Shades of Grey has turned into.

Source: Initially received from publisher via NetGalley but I also received a print copy from J R Books in exchange for an honest review