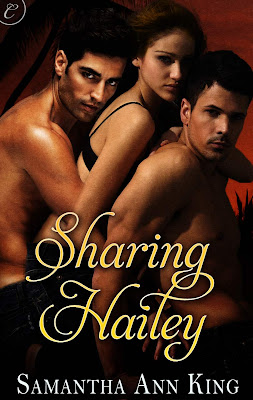 Hailey Anderson's deep, dark secret? She's been madly in lust with her overprotective brother's two best friends for years. Gorgeous woodworking artist Mark Allen and sexy doctor Tony Adamo have no idea they star in her fantasies every night.

After a nasty breakup with her abusive boyfriend, Hailey's looking for a little distance. Headed for a two-week Hawaiian vacation with her brother and his hot friends, Hailey can't wait to feast her eyes on Mark's and Tony's rock-hard, ocean-slick bodies. Even if she can't touch.

But instead of treating her like their little sister, Mark and Tony have a surprising proposition: a monogamous ménage à trois. The three of them—and no one else. Both men want Hailey and have agreed to share her. The red-hot reality is even better than the forbidden fantasy. Until Hailey's ex threatens their newfound happiness…

Review:
Hailey has finally found the courage to break up with her abusive boyfriend and getting away with her brother's family and his two best friends is just what she needs to recover. She has had a crush on her brother's friends Tony and Mark for as long as she can remember but knows it would be impossible to choose between them and she is scared of ruining the friendship that they all share. What she doesn't realise is that Mark and Tony also have feelings for her and they are finally ready to take things a step further. Rather than risk the chance of losing her completely they decide to offer her the chance to be with them both. It may sound like Hailey's wildest fantasies come to life but can they really make a relationship work?

I have to admit that I don't read many menage stories so I'm in no way an expert on this type of book but I fancied reading something different and I really enjoyed Sharing Hailey. This kind of relationship only tends to work for me if I can feel a real emotional connection between all of the characters involved and in this case I think that was really well done. Hailey has known Mark and Tony forever so they have a lot of shared history and a very close friendship. Even though the two guys aren't into each other physically they do have a strong bond and care about each other. Neither of them is prepared to lose their friendship but above all else they both love Hailey and want her to be happy. From the beginning they are convinced there is a way to make things work between them and it is actually Hailey who is the one doesn't think things can last long term.

There were times when I felt the guys were rushing into things a bit too quickly so I was pleased that Hailey forced them to take a step back occasionally. They were thrown into living together very quickly when Hailey's stalker ex arrives on the scene to cause trouble so I appreciated the turn things took towards the end of the story (that probably sounds confusing to anyone who hasn't read the book but I'm very aware that I don't want to give spoilers in this review!). Their relationship was very steamy and it was easy to see why Hailey couldn't choose between Tony and Mark - I think I'd have been very tempted to have both of them myself, after all who could resist two gorgeous, sexy men who want nothing more than to fulfil your every desire?

It was quite funny to see how Hailey's brother Jake reacted to his sister going out with not one but both of his best friends at the same time. I did feel he came around to their relationship a bit too quickly but considering everything else that was going on it was understandable. There was actually a lot more to the story than I expected, when I started reading I was thinking it would just be a very hot erotic read without much of a plot but the added element of Hailey's psychotic ex made things really interesting. I have to admit that the characters make some really stupid decisions at times potentially putting Hailey in danger which I found that incredibly annoying. A couple of times I was convinced something horrible would happen because of the way she'd decide to go off on her own despite having a stalker but then the story would skip ahead to the next day and nothing would have happened. I found that irritating but it did mean that when something finally did happen with her ex it came from an angle that completely surprised me.

One of the things I felt that the author got across really well was the fact that domestic violence can happen to anyone. Hailey repeatedly beat herself up saying that she wasn't the sort of person who ended up in an abusive relationship - she was educated and intelligent and felt that she should have known better. The escalations in Hailey's ex's behaviour was really well described and showed just how easy it is for anyone to fall into the trap of thinking what is happening is their fault. Changes in this kind of relationship are usually so subtle that by the time the victim realises how bad things are it is incredibly hard to escape, people are usually so isolated from family and friends by that point that they feel they have nowhere to turn for help.I loved the way that Samantha Ann King manages to raise awareness about such an important issue in a way that doesn't feel like you are being preached at. The story is still a fun and erotic read but has much more depth than I expected and I'll definitely be keeping an eye out for more of her work in the future.