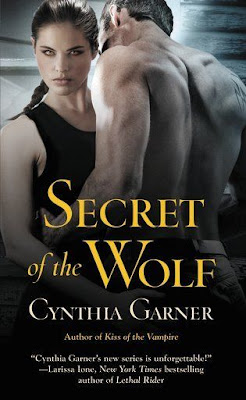 Once a generation, the rift between the paranormal world and the human world opens, allowing supernatural entities to cross. Vampire, demon, or shapeshifter, they can save the world-or send it spiralling into chaos.

As a werewolf liaison to the Council of Preternaturals, Tori Joseph is used to straddling the world between humans and immortals. She plays by the rules and always delivers justice, no matter the cost. But after a string of increasingly brutal attacks results in humans turning into werewolves, Tori doesn't reveal her horrifying suspicion: Someone very close to her might be responsible.

Investigating the paranormal violence, no-nonsense detective Dante MacMillan believes Tori is hiding something. His search for the truth draws him into greater danger as he gets closer to the dark realm of the immortals-and to the sexy werewolf who stirs his primal lust. Now with evil closing in around them, Dante must convince Tori to trust him . . . before her deadly secret destroys them both.

Warriors of the Rift Series:
Kiss of the Vampire
Secret of the Wolf
Heart of the Demon (2013)

Review:
Please note that Secret of the Wolf is the second book in the Warriors of the Rift series and this review will contain spoilers for the first book Kiss of the Vampire. If you're new to the series I would suggest not reading any further but it is definitely worth checking out reviews for the first book.

Every 73 years a Rift opens between dimensions that allows incorporeal beings to come to earth. These beings must take over the body of a human host or they are unable to survive, the body they take over then becomes an immortal - either a vampire, shapeshifter or a demon. Traditionally the beings that were sent through the rift were other world criminals who were banished from their own dimension as punishment for their crimes but it seems like that is changing. Tori is a werewolf who works as the liaison for the Council of Preternaturals and she is currently investigating the device that Tobias managed to take from his enemy Natchook in the previous book. She must work alongside human police detective Dante to try and discover what the device is for. But work on the device comes second to investigating a spate of werewolf attacks - just why is the werewolf changing seemingly random people and can they find a way to stop them?

I enjoyed the second instalment to the Warriors of the Rift series but I have to admit that it didn't quite live up to my expectations. I had hoped to find out more about the ongoing story with Natchook (I still think that is one of the worst evil bad guy names I've ever come across!) but it didn't really feel like that plot thread moved much further forward. We learn a little more about his motivations but not enough to satisfy me. This series seems to straddle the line between urban fantasy and paranormal romance but it doesn't quite manage to tick all of the boxes for me in either category. There isn't quite enough action and intrigue for an urban fantasy series and the romance is a bit too slow and straightforward for a paranormal romance.

While I liked both Tori and Dante I wanted a bit more conflict between them. It was very clear from the beginning that they both had the hots for each other. The only thing stopping them being together was that Dante was afraid to fall in love with her and then lose her. He also didn't feel that he had enough time to devote to a relationship in between caring for his recovering sister and building his career. These just seemed like pretty poor excuses to me - especially considering the chemistry between them. I prefer my heroes to be a bit more of the go and get her type rather than too scared to attempt to claim their woman.

With regards to things that happened with Tori's brother Rand and Dante's sister Lily I felt that it was too easy to figure out what was going on. None of the reveals surprised me as I'd guessed quite early on how things would turn out for each of the main characters. It's a bit disappointing because I do think this series has a lot of potential but neither of the first two books have managed to live up to that. I do have hopes that when the author finally hits their stride with these books then there could be a massive improvement. Will I read the next book? At the moment I'm not too sure. I do want to know what happens next in the ongoing story line but characters Finn and Keira who are the focus of the next book aren't really ones that I'm particularly curious about. Don't let me put you off giving the series a try though - I've seen a lot of very positive reviews for Kiss of the Vampire and I think anyone who loved the first book will enjoy this one just as much.