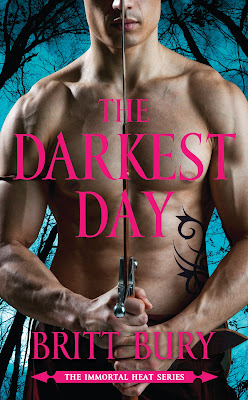 Izel Campbell was raised to believe she is an immortal Fionn with the magical skills of persuasion. But when she travels to Scotland to visit her ancestral home, Izel discovers that she is actually the world’s last living human. Forced to run for her life, Izel crosses paths with Kelvin Kerr, the Campbells’ greatest foe—and the most magnificent warrior she has ever seen.

A thousand-year-old battle chief of the Kerr clan, Kelvin lives only to avenge his father, who died at the hands of the bloody Campbells. Honor demands he kill the Campbell heir, but when he learns that the lovely Izel is both Campbell and human, Kelvin is torn between duty and desire . . .

ON THE DARKEST DAY

Immortal Heat Series:
The Darkest Day
Further titles and release dates for this series to be confirmed

Review:
The Kerr and Campbell clans have been enemies for centuries and Kelvin has vowed to rid the world of Campbells if it's the last thing he ever does. He has spent years searching for the remaining heir but when he finally finds her Izel is not what he expected. Izel doesn't even know that her family is at war with the Kerrs, she has been raised to believe that she is an immortal and has travelled to Scotland in search of her grandfather for answers to some of her questions. When her paths cross with Kelvin he is determined to follow through on his vow and kill her but after discovering that she is the last remaining human he wonders if that is really the right thing to do. As they journey together to Kelvin's family home the attraction between them is undeniable but Kelvin has begun to suspect that she is his fated mate. But surely fate wouldn't be so cruel to make his enemy his mate? Can he put his feelings to one side and do his duty by destroying Izel? Does he even want to?

The Darkest Day is the first book in a new paranormal romance series by Britt Bury and was an enjoyable read. Although the story is set in modern times it does have a historical feel to it as the pair travel across Scotland together to the Kerr castle. Kelvin is a highland warrior from a family of Pookah's (Immortal Warriors with special powers linked to animals but without the ability to shapeshift). I have to admit that I really don't like the name pookah - every time I read it it made me think of fluffy bunny rabbits and it doesn't shout out sexy highland warrior to me. If you ignore the stupid name I did really like Kelvin, he was definitely a gruff and sexy alpha male who knows what he wants and is prepared to take it. At times he could come across as a little on the scary side but he was actually a sweetheart once you got to know him and although he does a few stupid things I couldn't help but forgive him.

I found myself really liking Izel though. Her whole life is turned upside down when she arrives I Scotland. Not only does she discover that she is the last remaining human but she has to learn to cope with a whole new set of abilities that she never realised she had. With nobody else to talk to she relies on Kelvin to give her the information she needs and to help her find her family. She is drawn to this sexy warrior and hopes they can build something together but she doesn't know the secrets he is keeping. Nothing goes smoothly between these two but you can't deny the heat that is between them and I really enjoyed watching their banter and the building chemistry.

There were a few things about the world building that bugged me - apart from the ridiculous pookah name I wasn't keen on the way males had to sleep with their mate before they would know for sure that they were fated. I could have lived with that but it seemed really silly that they had to sleep with them on a particular night of the year or they would miss their chance at a happy ever after - if they got a bit over enthusiastic and slept with them early they would never be able to complete the mating ceremony. I understand the author was trying to bring something different to the table but I prefer rules that make a bit more sense - this didn't work for me from a purely biological point of view considering that Kelvin was desperate to sleep with Izel because he thought she was his mate and he came close to loosing his chance to be with her. That doesn't leave me with a lot of hope for the species as a whole - especially when it was stated that he liked to sleep with a lot of women while he searched for his mate. How many pookah's out there would end up missing their chance to be with their one fated mate?

Anyway, ignoring that irritation I still really enjoyed the book and am looking forward to reading more of this series. We don't spend much time with most of the secondary characters in this instalment but I'm already dying to find out more about Ramsey's history and really hope he is getting a book of his own. I think The Darkest Day will appeal to fans of Kresley Cole's Immortals After Dark series and I'll be keeping my eye out for more by Britt Bury in the future.

Other Reviews:
If you have reviewed this book on your blog
at 18:00