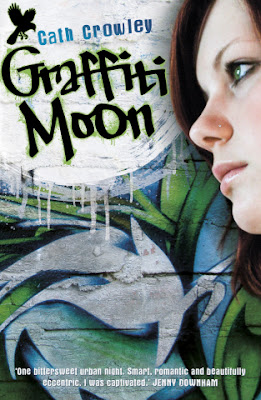 'We've got at least seven hours to get what we want before the sun comes up.'

School is over, and Lucy has the perfect way to celebrate: tonight she's going to find Shadow, the mysterious graffiti artist whose work appears all over the city. Somewhere in the glassy darkness, he's out there, spraying colour, birds and blue sky on the night. And Lucy knows that a guy who paints like Shadow is someone she could fall for - really fall for.

The last person Lucy wants to spend this night with is Ed, the guy she's managed to avoid since punching him in the nose on the most awkward date of her life. But when Ed tells Lucy he knows where to find Shadow, the two of them are suddenly on an all-night search to places where Shadow's pieces of heartbreak and escape echo off the city walls. And what Lucy can't see is the one thing that's right before her eyes.

Review:
Lucy, Jazz and Daisy are going to celebrate the last day of school by staying out all night and they all have different goals that they want to accomplish by morning. Jazz just wants to be kissed, Daisy wants to get over her ex-boyfriend Dylan and Lucy is determined to track down the mysterious graffiti artist known only as Shadow. She has been a fan of his work for ages and feels like she has come to know him through his paintings, if only she could actually meet him she is sure they would be perfect for each other. Dylan wants to win Daisy back so he tells them that he knows Shadow and Poet and offers to take the girls to places where they might find them. Ed and Leo are dragged along for the ride but as the friends get sidetracked it ends up being just Lucy and Ed continuing the search.

Graffiti Moon is told from both Lucy and Ed's points of view in alternating chapters with some of Poet's poems scattered throughout the story. This allows us to really get to know both main characters and gives us the advantage of seeing the same scene from their differing perspectives. Lucy is such an interesting character to get to know, she comes from an unusual family and has definitely been raised to think outside the box. Her way of looking at the world is at times innocent but also very astute and her observations about the people and world around her were fascinating. An artist herself Lucy works with glass rather than with paint and I really enjoyed learning a bit about her training as a glass blower. I've watched glass blowers work in the past and was amazed at the way they were able to create such beautiful and intricate works from what is basically just melted sand with a few extra ingredients. Lucy has been falling for Shadow since she first saw his paintings and she is convinced that if they ever met he would be the perfect guy. She has had all these imaginary conversations with him and thinks they would be able to have these fantastic discussions about their favourite artists and paintings.

Ed dropped out of school because he struggled to read and write, he isn't stupid by any means but words always confuse him. I believe he is probably dyslexic but as he was never diagnosed he didn't get the help he needed. He isn't a stranger to Lucy, in fact they even went on a date once but it ended up being a disaster when she broke his nose for touching her arse! They haven't spoken since and both have their own resentments from that night. As Ed helps Lucy search for Shadow she starts to discover that they have much more in common than she ever suspected but will she realise what is right in front of her before it's too late? Ed is keeping secrets of his own and is afraid of the way Lucy will react if he owns up. With their past and secrets between them can they find a way to reconnect?

This was the first book I've read by Cath Crowley but I'm sure it won't be the last, I really enjoyed her descriptive writing style and she really brought to life the paintings she described so I could see them in front of me as I was reading. Graffiti Moon was an enjoyable read and one I would recommend to anyone who enjoys contemporary romance or who is interested in art.