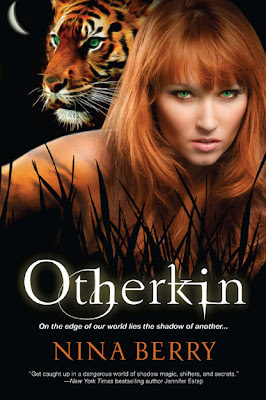 Sixteen-year-old Desdemona Gray doesn't even bother with crushes on cute boys now that she's forced to wear a hard plastic back brace all day. What guy would want to literally have to knock on a girl to be let in? So she squashes down every impossible desire until an uber-awkward brush with a boy brings out all her frustration and she changes...into a tiger. In that bewildering moment, she is captured by Ximon, the leader of a fanatical group hell-bent on wiping out the five remaining tribes of shape-shifters, known as the otherkin.

With help from a handsome, mysterious fellow captive named Caleb, she escapes and goes on the run, finding allies and learning the truth behind the legends of wizards and were-creatures. Then Ximon goes too far, and Dez must tap into all her buried desires to find her inner tiger and save herself, her new friends, and the boy she loves.

Review:
Dez has always thought she was a normal teenager - apart from the back brace she has to wear 23 hours per day thanks to her scoliosis - so the day she gets angry and transforms into a tiger comes as quite a shock! The next thing she knows someone is shooting through her bedroom window and she wakes up trapped in a cage. She manages to escape captivity with fellow prisoner Caleb and finds herself on the run from a group of people she never knew existed. Learning she is one of the Otherkin is a lot to take in and she has little choice but to trust Caleb when he tells her about a school where she can learn about her powers and be kept safe from the members of the Tribunal who want to kill her.

As soon as I saw the cover for Otherkin I had to read it - just take one look at that image and tell me it doesn't make you want to pick up the book! I know you shouldn't judge a book by it's cover but I do it time and time again and luckily in this case my instincts were right. Nina Berry has created an interesting world with different kinds of shapeshifters, a world where two realities are layered on top of each other and the Otherkin are able to access the layer that most people can't see and use the shadow they find there to effect our world. I do still have some questions about exactly how the Othersphere works but I'm looking forward to learning more as the series continues.

The different shifters come from five different families - cats, wolves, bears, birds of prey and rats. All of the other species have died out and there are all sorts of conflicts between the remaining clans. Each group has very specific characteristics that don't always allow them to live in harmony together. It was believed that there were no tiger shifters left so when Dez turns up she comes as quite a surprise to the others and they aren't sure what to make of her. She was adopted as a baby and has no knowledge of her family history so this whole world is very new to her and there is a lot to understand. I did think that she accepted her very first transformation a little too easily but it was interesting to see her thrown in at the deep end and having to cope in an extremely high stress situation. She proves herself to be both strong and brave, especially when she refuses to leave without rescuing Caleb first.

I enjoyed meeting the different characters who were studying at the school and learning about the powers they all have. Along with the different kinds of shifters you also have Callers who have the ability to make things using the shadows from the Othersphere. There is distrust amongst the different shifters species but none of them trust the callers so this makes it easier for the Tribunal to pick them off one at a time. It is up to Dez to try and get the others to work together against a common enemy but that isn't going to be easy.

Otherkin is a great start to a new series and has left me excited to find out what happens next - I'll definitely be picking up a copy of Othermoon when it is published early next year. If you're looking for a YA urban fantasy with action, intrigue, a few surprising twists and the beginnings of a promising romance then look no further - Otherkin is just what you need.

Other Reviews:
Artsy Musings of a Bibliophile
If you have reviewed this book on your blog please leave a link to your review in the comments & I'll add the link here.