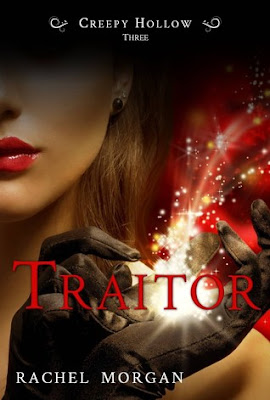 Violet and Nate may have escaped the labyrinth, but only one of them came out unscathed. Nate is now the bearer of a mysterious eye-shaped tattoo, a mark he has no memory of receiving. While Vi is intent on discovering the meaning of the tattoo, Nate seems less interested. His experience in the labyrinth has caused recurring nightmares, and he’d prefer to pretend none of it ever happened. But Vi has never been one to let a mystery go unsolved, and she’ll do whatever she can to discover who’s behind the tattoo—even if it means leaving Nate out of her plan.

Review:
Traitor is the third story in the Creepy Hollow series by Rachel Morgan, these short stories will be published as ebooks on roughly a monthly basis with the fourth story Masquerade due to be released in July. As this review is for the third story it may contain spoilers for previous titles, this series really does need to be read in order for you to follow the ongoing plot.

Traitor picks up the story from where Labyrinth left off, Violet's suspension is finally over and she is allowed to return to her guardian training. Now that she knows Nate isn't human it is no longer forbidden for her to spend time with him but there is no way for her to tell her boss without letting on that she broke the rules in the first place. Since they escaped from the labyrinth Nate has a mysterious tattoo on his back. Vi is worried about where it could have come from and is determined to get to the bottom of the mystery.

I have been really enjoying this series of short stories by Rachel Morgan and Traitor was another great instalment. These stories are perfect for when you want something quick to read because you're short on time. I really enjoyed getting to find out more about the different training that the Guardian's go through in this story. It was nice to see Vi with some of her fellow trainees - both ones she is friendly with and ones like Ryn who is her biggest rival and a bitter enemy. There are also a few really sweet moments between Vi and Nate as they get to go on their first proper date. I really like them as a couple but I did miss the more easy going Nate from the first two stories. He had quite a shock when he discovered his heritage though so I'm not surprised it has had an effect on him emotionally.

As the title would suggest there is a shocking twist at the end when an unlikely traitor is revealed and I have to say this left me desperate to get my hands on Masquerade, luckily I don't have too long to wait for it's release!