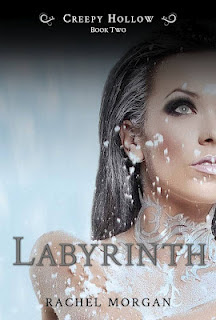 Guardian trainee Violet Fairdale has officially been suspended for bringing a human into the fae realm. No assignments, no training, and goodbye to that position at the top of the class. While this sucks, it at least allows her time to secretly keep visiting Nate, the human boy who caused her suspension in the first place. It’s not the wisest move to continue breaking Guild Law, but no one’s going to find out. And Nate is worth the risk, isn’t he?

To prevent herself from going into assignment withdrawal, Vi throws herself into investigating Nate’s real mother, Angelica, a woman who seems to be mysteriously connected to the world of the fae. Nate’s never given her much thought, but that was before an insane faerie abducted him in order to blackmail Angelica out of hiding. Now Nate wants answers, and Vi’s got the perfect ability to help him.

Review:
Labyrinth is the second story in the Creepy Hollow series by Rachel Morgan, these short stories will be published as ebooks on a monthly basis with the third story Traitor due to be released in May. As this review is for the second story it may contain spoilers for the first instalment of the series.

Labyrinth picks up the story a few days after the ending of Guardian, Violet has been suspended from her guardian training for bringing a human into the fae realm - even though it wasn't her fault. She's annoyed that she is going to fall behind her classmates and will probably lose her place as the top of the leader board. She has a secret though, one that will get her in even more trouble if it is found out - she didn't erase Nate's memory. In fact, she has continued to spend time with him and has even promised to help him find his mother.

I'm not going to say anything else about the plot because I don't want to give spoilers but I think this instalment was even more action packed than the first. One of the suspicions I had after reading Guardian has been confirmed but there were a few surprises in there too. Labyrinth is a great quick read but does leave things on a killer cliffhanger so I'm glad we don't have to wait too long for the next part of the story. If you enjoyed Guardian then I think you'll like Labyrinth even more but if you're new to the series then I'd definitely recommend reading the stories in order. If you're looking for a fun series that can be read in your lunch breaks then it would be well worth giving this one a try.