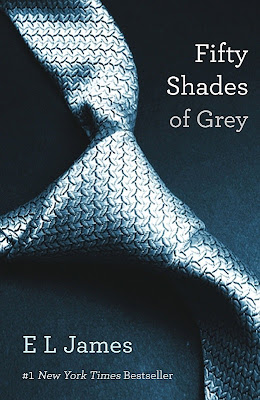 Romantic, liberating and totally addictive, this is a novel that will obsess you, possess you, and stay with you for ever.

When literature student Anastasia Steele interviews successful entrepreneur Christian Grey, she finds him very attractive and deeply intimidating. Convinced that their meeting went badly, she tries to put him out of her mind – until he turns up at the store where she works part-time, and invites her out.Unworldly and innocent, Ana is shocked to find she wants this man. And, when he warns her to keep her distance, it only makes her want him more.But Grey is tormented by inner demons, and consumed by the need to control. As they embark on a passionate love affair, Ana discovers more about her own desires, as well as the dark secrets Grey keeps hidden away from public view . . .

Review:
I have spent the last 3 days trying to get my thoughts straight about this book and I'm still struggling so I fear that this may end up being more of a rambling discussion than an actual review - hopefully you'll bear with me though. I have to admit that I had reservations about Fifty Shades of Grey before I even picked it up, everything I'd heard about it left me with the impression that I would either completely love it or absolutely hate it and I just couldn't tell which way it would go.

For the few people that haven't heard of this book Fifty Shades of Grey was originally posted online as free Twilight fan fiction under the name Masters of the Universe. I understand there are some minor differences between the free story and the version that is now on sale but I can't compare the two as I have only read it in it's latest incarnation. I have to admit that I was irritated by the similarities with Twilight and I think I would have liked the story a lot more if I hadn't constantly been comparing the characters to Bella and Edward (we also see the author's version of Jacob along with some of the Cullens). Now this may be based on the characters from Twilight but the story itself is definitely adult in nature and not one I would recommend for anyone who is under age! There are no vampires in sight but the story contains a lot of sex along with BDSM elements so isn't going to be to everyone's taste.

As anyone who read my status updates on Goodreads will already know for the first half of the book my feelings were pretty negative - I could write a list as long of my arm about things that I didn't like. The writing could have been so much better if some of the constantly repeated phrases had been deleted and I was sick to death of hearing about Ana biting her lip and the way Christian's trousers hung off his hips. I was also frustrated by the way Ana changed from being ridiculously innocent to a complete sex goddess after just one night with Christian because it was completely unrealistic. While we're talking of unrealistic Christian has the stamina of multiple duracell bunnies (if only all men were like that *sigh* lol) and if all women orgasmed as easily and often as Ana does then I doubt we'd ever leave the house! The sheer number of things that irritated me should have been more than enough to make me give up on the book but for some reason Fifty Shades of Grey is just so compelling I couldn't put it down.

Ana is 21 and just about to graduate from college but in my opinion she comes across as much younger, particularly at the beginning of the book. I couldn't stand the constant arguments she had with her subconscious and her inner goddess (yes she really does have not one but three distinct personalities in her head and they all frequently talk to each other!) so I wanted to scream every time they cropped up. She meets Christian when she stands in for her roommate to interview him for the student newspaper and the fact that she is so shy and innocent leads him to think she will be the perfect submissive. Ana may not be my favourite fictional heroine (in fact she is way down on the list) but I was pleased that she isn't quite the doormat that she first appears to be. She gives into more of Christian's demands than I would have done but she also holds her ground about the things that are really important to her. I enjoyed seeing her banter with him and I loved the email exchanges between the couple.

Christian is all the things that should send a woman running for the hills. Despite the fact that he is a rich and successful business man he is also a domineering control freak with some major stalker tendencies going on. He describes himself as fifty shades of fucked-up and that phrase fits him perfectly. Not exactly my idea of a dream man so you can imagine my surprise when I realised that I've actually become more than a little obsessed with him. Like a lot of women I have a bit of an obsession with bad boys - I really don't know why we always have that compulsion to fix people but Christian is an ideal candidate. He shows just enough vulnerability to make you feel that Ana can help him and to make you believe that he does genuinely care for her. We still don't know the full details of his past but we know enough to understand how he ended up the way he is and for our hearts to break for the little boy he could have been. I didn't want to fall for Christian but I just couldn't help myself!

I'm not quite sure how E.L. James did it but despite the problems I had with Fifty Shades of Grey she has still created a story that I have become obsessed with. By the second half of the book you'd have had to pry my kindle from my cold dead hands to get me to stop reading and I haven't stopped thinking about the characters since I finished it. My fingers were literally twitching to press the buy button for the rest of the trilogy and if it wasn't for the fact that I have other books that I promised to read first I would have devoured all three books one after the other. I have a feeling that this whole series is one that is going to stay with me for a long time to come. 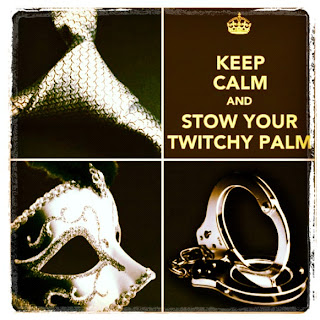 Consider me a full blown member of the Christian Grey fan club!
at 18:00