Today I'd like to give a very warm welcome to Siobhan Curham who has dropped by to share the playlist for her book Dear Dylan. I was lucky enough to read Dear Dylan when Siobhan self published the story back in 2010 and I thoroughly enjoyed it (you can read my review here). So I was thrilled to find out that the book had been bought by Egmont for their new Electric Monkey imprint and of course jumped at the chance to take part in the blog tour. In case you've not heard of Dear Dylan here is the cover image and blurb: 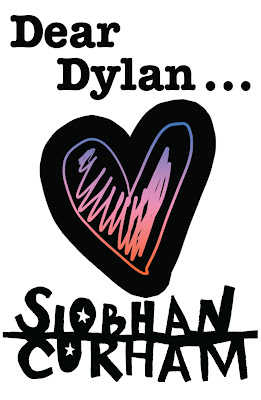 A first crush. An unexpected friendship. A dream come true. A perfect read for fans of Cathy Cassidy, Sarah Dessen and Karen McCombie

Fourteen year old Georgie Harris feels as if the summer holidays are over before they have even begun. Banned from going to the local drama workshop by her bully of a step-dad and her increasingly fragile mum, she is consigned to six long weeks of looking after her tooth-fairy obsessed kid sister. Sick of feeling like the outsider at home and at school, she starts emailing the one person she thinks might understand; Dylan Curtland, star of the popular soap opera Jessop Close. And when Dylan starts emailing back, Georgie finally feels a tiny spark of hope. At last she has someone who really gets her, someone who really wants to help. But in the faceless world of email all is not as it seems...

Now I'm going to hand over to Siobhan so she can talk about the Dear Dylan Playlist.

Siobhan Curham
Dear Dylan Playlist
Music features quite heavily in Dear Dylan – the main character, Georgie, is a very talented singer and the book follows her as she takes part in a summer workshop, putting on a production of the musical Bugsy Malone. I had a lot of fun putting together this playlist for the book, which includes songs that are featured in the story and songs that sum up some of the central themes, such as friendship and strength and hope. I hope they bring a smile to your face too…

Wonderful Tonight by Eric Clapton
Georgie loves this song as it reminds her of her dad and a time when she and her mum were so much happier. She also sings it in her audition for Bugsy Malone.

Ordinary Fool, from Bugsy Malone
This is a song Georgie has to sing in the show and she really identifies with the lyrics.

Club Tropicanna by Wham
This is a cheesy eighties classic and is on the playlist because it would have been a key part of Georgie’s soundtrack growing up, given her mum’s insane love for the lead singer George Michael (she even named Georgie and her sister Michaela after him!)

Somewhere Over the Rainbow by Eva Cassidy
This is such a beautiful version of the song and it reminds me of Georgie in terms of her sense of hope.

Who’s Laughing Now by Jessie J
In Dear Dylan, Georgie has to deal with some quite hurtful incidents involving her so-called best friend, Jessica. For most of the book she feels inferior to Jessica, but, just as in this song, Georgie is the one who has the last laugh.

Stronger by The Sugababes
This song became my theme tune when I was going through a really tough time in my life a few years ago. It is such an empowering song and I can imagine Georgie playing it when she’s at her lowest ebb and getting a lot of strength from it.

If I Can Dream by Elvis Presley
The key theme of Dear Dylan is the importance of dreams. This song sums it all up perfectly to me, and, after listening to it, anything feels possible.

Carry On by Ben’s Brother
A beautiful song that to me symbolises the importance of the online friendship that is central to Dear Dylan and how the love and support of a friend can make all the difference.

Climb Every Mountain by Shirley Bassey
Another epic song about never giving up on your dreams no matter what obstacles you encounter on the way. In Dear Dylan, Georgie has to deal with some serious, and at times, terrifying issues in her home life, but she carries on holding out for the possibility of happier times.


~~~~~~~~~~~~~~~~~~~~
Thanks so much for visiting today Siobhan, there are some great songs on the playlist and I love the way they have such important meanings for Georgie and the story.