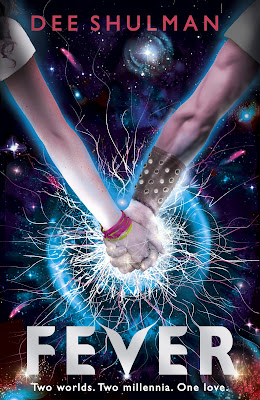 A fearless Roman gladiator
A reckless twenty-first-century girl
A mysterious virus unites them . . .

AD 2012
Eva is brilliant - but troubled. Starting her new life at a school for the gifted, a single moment in the lab has terrifying results.

An extraordinary link brings Sethos and Eva together, but it could force them apart - because the fever that grips them cannot be cured, and falling in love could be lethal.

Can love survive when worlds collide and time itself is threatened?

Fever Series:
Fever
Titles and release dates for further books in the series are currently unavailable

Review:
As soon as I read the blurb for Fever I knew I had to read it, come on - a time travel story revolving around a 21st century girl and a Roman Gladiator - how could I resist? I have to admit I've not read many time travel stories before and definitely none involving a gladiator so I was curious to see how things would play out. I really enjoyed this first instalment to Dee Shulman's new trilogy and am looking forward to getting my hands on the next 2 books, I just hope I don't have to wait too long for them!

I have to admit that I didn't think I was going to like Eve very much when she was first introduced to us. In the first couple of pages she came across as a bit of a selfish brat but as I got to know her better I really warmed to her. There is a bit of "too perfect to be true" about her as she is super smart, so beautiful that boys fall at her feet and even a talented musician and singer but by the time I discovered that about her I already really liked her so I was able to ignore that and get on with enjoying the story. Eve hasn't had an easy family life and has never found it very easy to make friends, she struggles to fit in and has worked hard to get herself kicked out of her last two schools. When she finds out about St. Magdalene's boarding school she feels like it is her last chance to find the place where she belongs and she finally starts making friends. I felt quite sorry for her when one of her new friends turned against her but it came across as very realistic teenage behaviour and I'm sure most girls will have faced something similar at some point in their lives.

Seth on the other hand was a character I liked from the moment he was introduced. He isn't a gladiator through choice but because he was captured and forced into slavery. He doesn't particularly enjoy the battle but fights because he has to to survive - when fights are to the death he is left with no other option but kill or be killed. Seth is strong, fast and an exceptional fighter which is what has kept him alive. I particularly liked Seth's relationship with another slave Matt, they were captured at the same time and have looked out for each other ever since. Matt isn't strong enough to be a fighter but his healing skills have kept both him and Seth alive in the arena. The pair of them have been through a lot together but their friendship makes them both stronger.

The story switches between Londinium in AD 152 where we find out about Seth and Matt's lives and St Magdalene's boarding school in AD 2012-2013 where we see things from Eve's perspective as she struggles to fit in at her new school. I was very curious to see how Dee Shulman would make these two worlds collide and introduce the characters to each other and found the time travel aspect of the story very interesting. I'm not going to give any detail about it because I don't want to give spoilers so I'll just say it was a concept I've not come across before. I had hoped for a few more answers to my questions by the end of the book but I've just been left even more eager to get my hands on the next instalment.

Although I felt that both of the main romances were a little bit rushed I do think that this is something that will be expanded upon as the series continues. It is hard to get the balance right in the first book of a series when there is so much world building to be done and we are being introduced to a whole new set of characters. I would definitely recommend Fever to anyone who enjoys time travel or romance stories or who is interested in finding out more about the life of a Roman Gladiator. This was a promising start to a new series and it's one I'm looking forward to continuing.