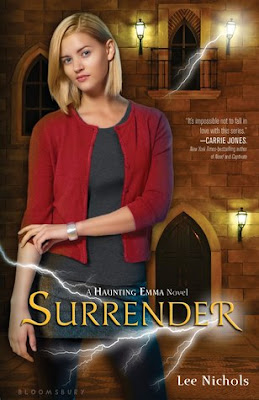 After a devastating battle at headquarters in New York, the ghostkeeping world is in shambles. But Emma and Bennett are finally a solid team - and sneaking off to quiet corners of Bennett's museum-like mansion is just what they need to recover from battle. That is, until Bennett's parents kick him out, leaving Emma feeling more along than ever.

The only way to save her relationship - and the ghostkeeping world - is to defeat Neos forever. But the wraith master's next attack hits close to home: Thatcher Academy. If evil ghosts manage to take over the entire school, even Emma won't be strong enough to stop them. Though if she or Bennett sacrifice their power, they might be able to end Neos's reign once and for all - and break the curse that is keeping them apart. The question is: who will be the one to surrender?

Review:
Surrender is the third and last book in Lee Nichols' Haunting Emma trilogy and it really sends the series out with a bang. The story picks up right after the ending of Betrayal with Emma and the rest of the ghostkeepers all reeling from Neos's latest attack. They know that Neos is gaining power with every day that passes and that Emma has the best chance of defeating him but just how much will she have to give up in order to beat him?

This has been a really enjoyable series and as much as I'm a little sad to see it end I was pleased with the resolution to things. Emma has really grown as a character since the first book, she is much stronger now that she has learnt to use her abilities and I've enjoyed seeing her find out about the ghostkeepers and their history. I did expect that we would learn more about the Knell in this book and was surprised that they didn't seem to have much of a role to play in the story - particularly since Simon was sent back to headquarters to help them rebuild. It was a shame to break up the ghostkeeper team from the last book but at least Emma still had Natalie and Lukas to rely on for help.

In Betrayal I had missed the interaction between Emma and Bennett so I was pleased that he had a bigger role in this book and they got to spend a bit more time together. I wasn't happy about his continued use of drugs to keep him strong enough to fight Neos but as much as I didn't agree with his actions I could understand why he felt he had no other choice. He loved Emma and didn't want to avoid being with her but he also felt that he needed to be strong enough to protect her and he couldn't see any other option.

I enjoyed seeing more of Sara, Harry and Coby and it was great that they have resolved their issues from the last book and are back in Emma's corner again. I also loved seeing more of the ghostly jocks that have been plaguing Emma since the first book, at least this time they finally offer her some assistance. It was interesting to have the added dynamic of both Emma and Bennett's parents in the story since they have been so conspicuously absent throughout the series. I know Emma's family have tried to explain their actions but personally I haven't forgiven them and I thought it was quite amusing that they felt they had the rights to waltz back in and expect to tell Emma what to do. I thought both families reactions to Emma and Bennett's relationship were realistic but ridiculous considering they had practically abandoned the pair of them!

I was slightly disappointed with the final showdown with Neos because it seemed to be a bit too quick and easy but overall I was pleased with the story. The action towards the end sucked me in and was impossible to put down and there were a couple of twists that I hadn't expected but I would have liked to have felt a bit more risk for Emma and her friends. Overall I've really enjoyed the Haunting Emma series and would definitely recommend it to paranormal fans who like their ghost stories to include romance, action and interesting mythology. I'm looking forward to seeing what Lee Nichols comes up with next!