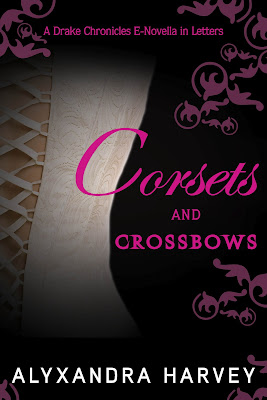 Rosalind Wild thinks it's time for the Helios-Ra to give full membership and recognition to the female descendants of the society-after all, it is 1816 and it's time to make room for new traditions. When Rosalind interrupts a plot to assassinate the leader of the Helios-Ra, she sees an opportunity to prove her worth. But she never expected the assassin to be someone so irresistible, and off-limits. Written as a series of letters to a close confidante, this exciting e-novella gives a glimpse of the early days of the vampire hunting society as seen through the eyes of Hunter Wild's feisty ancestor.

Review:
Alyxandra Harvey has recently written several novellas to go along with her Drake Chronicles series, they are all quick reads and available for a reasonable price via Amazon for the kindle. If you don't have a kindle there are options to read the story on your computer or through various apps for other devices.

Corsets and Crossbows is set in the early 1800's so can be read as a prequel to the series or at any other time because it contains no spoilers for the main storyline. The story is told using a series of letters from one of the first female members of the Helios-Ra; Rosalind Wild, to her friend Evangeline. Rosalind wants nothing more than to prove that women can be as good at vampire hunting as men are but although she has been allowed to join the Helios-Ra she hasn't exactly been welcomed with open arms. When she uncovers a plot to assassinate their leader she sees it as the ideal way to prove her worth.

This is an enjoyable quick read and has the same humour to it that the Drake Chronicles books do. Although there is no crossover of characters from the rest of the series it was nice to see a glimpse of Helios-Ra history. Rosalind is an ancestor of Hunter's and it shows that her family has always contained it's fair share of spunky women - you can see where Hunter gets it from! I'd recommend this for any fan of the series.