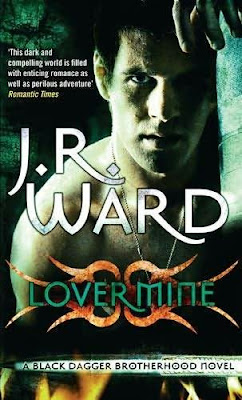 In the shadows of the night in Caldwell, New York, there's a deadly war raging between vampires and their slayers. And there exists a secret band of brothers like no other - vampire warriors, defenders of their race . . .

John Matthew has been through his vampire transition and taken to the life of the Brotherhood with a vengeance, but he still can't shake the nightmare of his past and is unsure of his future as a warrior hero. He's made a promise to honour the Brotherhood and their fight with the slayers at all costs, until the love of his life is kidnapped and he is forced to make a choice that could change his life and the Brotherhood's forever . . .

Review:
I have a confession to make - I wasn't particularly looking forward to reading John Matthew's story. Yes, I know I'm in the minority there and that he's a very popular character with BDB fans so don't lynch me! It's not that I don't like him because I really do but even knowing that JM is a reincarnation of Darius I've still always thought of him as that teenage boy that Tohr and Wellsie took in. So as much as I love him it's more as a little brother not as a potential hero and that made me nervous.

I've complained that the last couple of books have focused less on the main romance than the earlier books did and I think that this actually worked in my favour when it came to JM and Xhex. This time I was pleased that the focus wasn't too heavy on the romance and I really enjoyed most of the side stories that were going on. I liked the romance more than I expected to but I felt that Xhex was able to move on far too quickly after everything she went through as Lash's prisoner, it didn't feel at all realistic to me that she was so into JM just days after major surgery. I know the vampires heal quickly in a physical sense but I felt she would have needed more time to come to terms with things emotionally. I did like the fact that JM and Xhex were able to understand each other so well though, they have both been through difficult times and come out the other side as survivors and I felt that gave them a real emotional connection that has been lacking in some of the other BDB relationships.

I think my favourite parts of the story revolved around Blay and Qhuinn though - they completely stole the show for me & I really hope we get their story soon. As much as I'm routing for them to end up together I'm really enjoying having Saxton on the scene - it makes a nice change to see Qhuinn as the jealous one and I think he needed someone like Saxton to come along to make him start to accept his own feelings. I'm also loving that we're starting to see Tohr work through his grief and Lassiter cracks me up every time he steps onto the page - I really hope he's getting his own book!

I wasn't so keen on the sections to do with the ghost hunters, I'd guessed pretty early on who was behind the sightings and although I can understand why J.R. Ward wanted to introduce that character I felt this was a bit of a random way of going about it. Hopefully they won't be featuring in future books (the ghost hunters that is - not the other character!). Another niggle that I just have to mention was the introduction of a character called No'One. This series always has had the strangest names but that one is just beyond ridiculous and caused a lot of eye rolling as I was reading!

Although Lover Mine wasn't my favourite book in the series I enjoyed it much more than the last few books and I feel like the series is moving back in a more positive direction. For the first time in ages I'm actually feeling excited about the next book in the BDB series and that isn't something I've felt since I first read Lover Enshrined several years ago. Let's hope that Lover Unleashed manages to raise the bar even higher and then we'll be back to the awesomeness that was the earlier books.