Today is the UK release date for Meljean Brook's The Iron Duke so to celebrate I thought I'd compare the UK and US covers for the first two books in the series. I was lucky enough to meet Meljean at Authors After Dark last year (read all about it here) and I'd heard so many good things about The Iron Duke that I bought a US copy and was able to get it signed. It ended up being one of my favourite reads of 2011 so I'm really excited that it is now being published in the UK under Penguin's Berkley UK imprint. You can read my review of The Iron Duke here and this is definitely a book I'd recommend to anyone who loves romance - even if you're new to the steampunk genre. 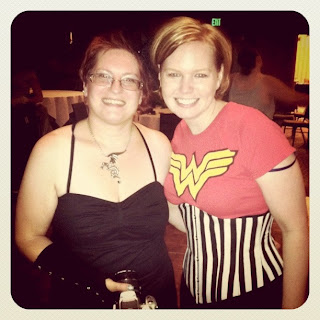 Me with Meljean Brook at the Steampunk Ball at AADPhilly
Anyway, before I share the covers I thought I should include the UK blurb for those of you who haven't read the book yet:

Steampunk adventure and seductive danger abound in the gritty world of the Iron Seas.

After the Iron Duke freed England from Horde control he instantly became a national hero. Now Rhys Trahaern has built a merchant empire on the power - and fear - of his name. And when a dead body is dropped from an airship on to his doorstep, bringing Detective Inspector Mina Wentworth into his dangerous world, he intends to make her his next possession.

Mina can't afford his interest, however, Horde blood runs through her veins, and becoming Rhys's lover would destroy both her career and her family, yet the investigation prevents her from avoiding him . . .

But when Mina uncovers the victim's identity, she stumbles upon a conspiracy that threatens the lives of everyone in England. To save them, Mina and Rhys must race across zombie-infested wastelands and perilous oceans - and Mina discovers the danger is not only to her countrymen, as she finds herself tempted to give up everything to the Iron Duke.

What do you think? Sounds great doesn't it and trust me it's even better than you think it will be!

So let's have a look at the covers 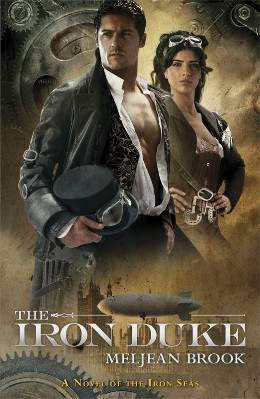 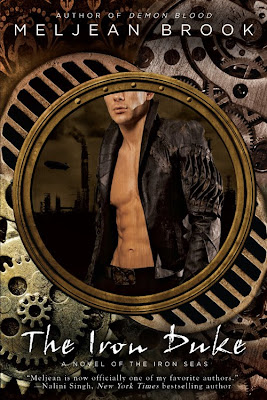 So which cover do you like best? I have to admit the half naked man on the US cover was part of the reason I wanted to read the book in the first place but I think I actually prefer the UK cover. I like the fact that it has both Mina and Rhys on it and I love their steampunk outfits!

The second book in the series is called Heart of Steel and has been at the top of my wish list for a while now. The only reason I haven't already read it is that I didn't want to order the US version after I'd discovered it was being published in the UK. Thankfully I don't have too much longer to wait now as Berkley UK will publish Heart of Steel on the 7th of June.

The Heart of Steel blurb:
In the sequel to The Iron Duke in the Iron Seas steampunk romance series by Meljean Brook, Heart of Steel sees the exotic and dangerous captain Yasmeen on an action packed treasure hunt across Morocco.

As the mercenary captain of Lady Corsair, Yasmeen has learned to keep her heart as cold as steel, her only loyalty bound to her ship and her crew. So when a man who once tried to seize her airship returns from the dead, Yasmeen will be damned if she gives him another opportunity to take control.

Treasure-hunter Archimedes Fox isn't interested in Lady Corsair - he wants her cold-hearted captain and the valuable da Vinci sketch she stole from him. To reclaim it, Archimedes is determined to seduce the stubborn woman who once tossed him to a ravenous pack of zombies, but she's no easy conquest.

When da Vinci's sketch attracts a dangerous amount of attention, Yasmeen and Archimedes journey to Horde-occupied Morocco - and straight into their enemy's hands. But as they fight to save themselves and a city on the brink of rebellion, the greatest peril Yasmeen faces is from the man who seeks to melt her icy heart . . . 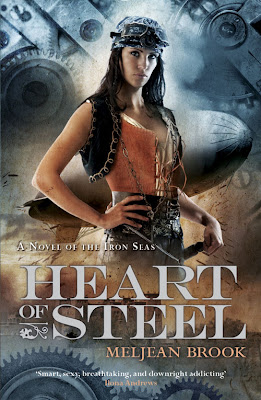 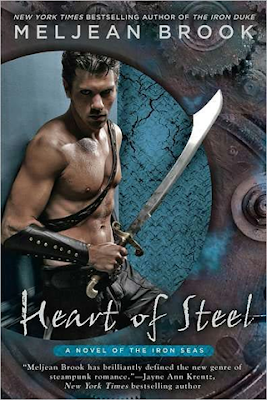 I'm finding it much harder to choose between the UK & US covers for Heart of Steel, I guess it depends on whether you prefer to have the hero or the heroine on the covers. I really liked airship captain Yasmeen when we met her in The Iron Duke so I like the fact that she features on the UK cover along with her ship, I think I'd have preferred to see Archimedes on the cover too though. Of course on the US cover we have the complete opposite and yes Archimedes looks hot but we're missing Yasmeen. It's a close one but I think I'd probably say the UK cover is my favourite.

So which of these covers do you like best? Have you read either / both of these books? If so I'd love to know what you thought of them.
at 09:00