Yesterday was the UK release for Michelle Harrison's latest novel Unrest. Michelle is the author of the successful Thirteen Treasures series for MG readers but this is her first book for teens. I will be posting my review of Unrest later today but I can tell you now that it's a fab and very creepy ghost story and not one you want to miss! Thanks to Simon & Schuster I have an extract of the first chapter to share with you here, I've also included the cover image and synopsis and the book trailer. 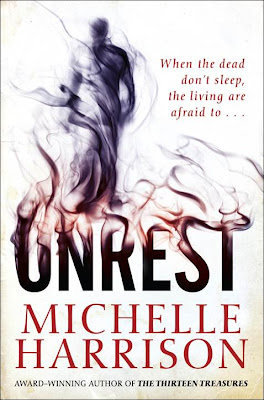 Seventeen-year-old Elliott hasn't slept properly for months. Not since the accident that nearly killed him. Sometimes he half-wakes, paralysed, while shadowy figures move around him. Other times he is the one moving around, while his body lies asleep on the bed. His doctors say sleep paralysis and out-of-body experiences are harmless - but to Elliott they are terrifying.

Convinced that his brush with death has attracted the spirit world, Elliott secures a job at a reputedly haunted museum, determined to discover the truth. There, he meets the enigmatic Ophelia. But, as she and Elliott grow closer, Elliott draws new attention from the dead. One night, during an out-of-body experience, Elliott returns to bed to find his body gone. Something is occupying it, something dead that wants to live again - and it want Ophelia, too . . .


Extract: Chapter One of Unrest by Michelle Harrison
(Posted with permission of Simon & Schuster UK)

It started the way it always did.

I sat up in bed, unsure of what had woken me. My first thought was the new family who had moved in upstairs. Rowdy, Dad called them, amongst other things. Not even a month since they’d arrived and they’d managed to upset everyone, crashing up the stairs at all hours, swearing, slurring and burping.

Not this time, though. There was only the hum of silence. Our flat, and the rest of the block, was quiet. The room was dark, apart from the light in the hallway. Dad had left it on overnight a lot recently, even though neither one of us spoke about it.

Something moved on the other side of the door, disturbing the light creeping in through the door frame. A figure, moving past in the direction of Dad’s bedroom. I wondered how long Dad had been there, watching me through the gap, and whether he had been into my room while I was still asleep. I knew he lay awake some nights, thinking. Worrying. About me, about Mum. About the accident, and how different things had nearly been. The familiar guilt crept up on me. Before I knew it I was out of bed and across the room, shivering in only my boxers. The flat was freezing. I darted out into the hallway, squinting at the sudden brightness, my hand reaching for the light switch. I wanted to show him, in the smallest possible way, that tonight I was all right. I glanced at the clock at the far end of the hall.

Three in the morning.

I should have known then. The time was the first signal. That was the problem, though. I never knew until it was too late.

My fingers found the light switch just as my toes met the puddle. I froze, my hand hovering in place. The laminate flooring was dotted with patches of water, each the size of a footprint, leading to the bathroom. I was standing in one and it was icy cold.

Down the hallway, the bathroom door clicked shut. My eyes trailed over the watery footprints. My ears caught a noise – a stifled sob – coming from the bathroom, and a faint trickle of running water. Then my hand was away from the light switch and out in front of me, reaching for the bathroom door as I followed the wet trail.

I wanted to ask Dad why he was crying, even though I knew the answer, deep down. A dense wall of steam wafted over me as I pushed the door open. It wasn’t warm, but instead cool and damp. I shivered again. Th e door continued to open without a sound and some of the steam cleared from the bathroom as it spread out into the hall.

I took a step inside, clouds of water vapour clinging to my skin. The trickling sound came from the bath. One of the taps was on. Through the haze I could just make out an arm draped along the side of the tub.

No response came. It was only then that I noticed how thin the arm on the side of the bathtub was. How pale, and hairless . . . and female. I stumbled forward, glimpsing – without intending to – more than I was meant to see.

The woman in the bath faced forward, but she didn’t see me. Her eyes were dull and empty, and her long hair trailed like seaweed. Th e water had a pinkish tinge to it and lapped softly at the overflow. The running tap was keeping the water warm, and the slow, steady trickle kept it at a level designed not to flood.

Most of the steam had now evaporated through the open door, making everything horribly easy to see. The slight curve of a smile on the colourless lips. The razor blade on the edge of the tub. The incisions on her wrists, red and grinning.

Too late I realised. Remembered. This has happened before. Which could only mean one thing . . .

I turned, staggering from the bathroom and raced for my room, zigzagging one way to leap over the cat and the other to avoid tripping over my football boots. I should have been leaving the horror behind when I left the bathroom, but now I had remembered, I knew there was more.

Light from the hall streamed across my bed as I reached the door. I wanted to fall into it and huddle under the covers until I’d stopped shaking.

Two things stopped me. First, there was a shadow by the side of the bed. A tall, thin shadow that was somehow a shade darker than all the others in the room – and vaguely human. It was motionless and faceless, yet somehow, I knew what it was staring at.

A body lay in my bed. I saw the short, dark hair on the pillow. Already I knew who it was.

A whimper tried to force its way out of my throat, but didn’t quite make it. I knew I needed to get back to myself, back into myself, but the shadow at the bedside was even more terrifying than the woman in the bathtub.

Slowly, the shadow’s head moved. Its focus changed, no longer on the me in bed, but on the me at the door. I lurched forward, scrambling for the opposite side of the bed and approached my body. Th e bed didn’t move – I was weightless, light as air.

My sleeping body’s mouth was open. I’d done it that way before. I leaned over, trying to prise its mouth wider while pushing my face into the tiny, impossible cavity. I felt the prickle of the shadow figure’s stare on my back and knew it had taken a step towards me. Towards us.

I pushed again, desperate, my hands clamped round the side of my body’s face. Just as I thought it was never going to work, that I’d never get back in, it happened. I felt a scratching sensation, then a rush of tightness all over, and then . . .

I was back in my body, jolted awake – for real this time. Heart thudding. Gasping, trembling, crying. Alone in the room. There was no shadow, though the feeling it brought still drenched me in sweat.

I wanted to collapse back into the covers, but there was one last thing I had to know. I eased myself off the bed and crept down the hall. This time, there was no woman in the bathroom. It was empty – and so was my bed when I returned to it.

It ended the way it always ends. With me, burrowed under the covers, too afraid to sleep again until dawn.

Here is a video of Michelle Harrison talking about the inspiration behind Unrest:

So what do you think? If the extract and trailer haven't convinced you that this is a book you NEED to read then nothing will! Have you added Unrest to your wish list? Don't forget to check back later to read my review.
at 09:00