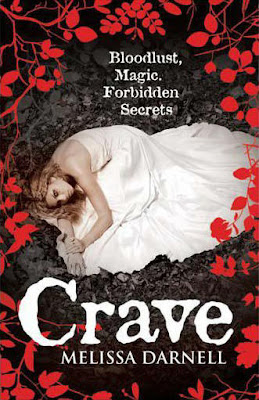 Savannah Colbert is back at Taylorsville High after a life-threatening illness, feeling more like a freak than ever. People are looking at her differently, staring and giggling. Except golden boy Tristan Coleman, who suddenly can't keep away. Savannah's falling under his spell.

But the mysterious Clann, a group of witches with unknowable power and an unbreakable bond to Tristan, are watching.

Star-crossed by history, Savannah and Tristan have been forbidden since birth. Their love could endanger everyone and everything they know. But the craving has started and can't be denied...

Review:
As Savannah was growing up her closest friends were among the Clann kids (children of influential families in her home town) but that all changed seven years ago when one day they all stopped talking to her. Although she has tried to move on and has made new friends Sav has always wondered what she did to turn the Clann kids - and her first boyfriend Tristan in particular - against her. After a mysterious illness that almost kills her Sav starts to uncover family secrets that may just explain what is going on. What they don't explain is why Tristan (and most of the boys in school!) suddenly can't seem to keep away from her.

I was drawn to Crave as soon as I first heard about it, I love stories of forbidden romance and I love anything paranormal so give me a modern day Romeo and Juliet, throw in some witches and I'm sold. As the first book in Melissa Darnell's Clann trilogy Crave is a book that starts quite slowly focusing on introducing the characters and explaining their history but builds up to an exciting finale that leaves you desperate to read the next book.

I really enjoyed the fact that the story was told from both Sav and Tristan's perspectives as it allowed us to see exactly what they were both thinking and feeling. I also liked the way we are introduced to most of the paranormal aspects of the story alongside Sav so it feels like you're uncovering her family secrets with her. Sav has a great relationship with her mother and nanna but has hardly seen her dad since he moved away, I was really intrigued by her mum and dad's history and hope we get to find out more about how they met and got together as the series continues.

It was great that Sav had some supportive friends but I was a bit disappointed that Anne, Michelle and Carrie seemed to disappear for most of the second half of the book to make way for Sav's new dance team. I have to admit that I got a bit bored of all the focus on the dance team but I think that could be in part because as a Brit and didn't grow up with that kind of cheerleader / sports team culture at my school. It wasn't something I particularly related to and didn't hold my interest but I'm probably in the minority there though.

I think my favourite character would have to be Tristan (what a surprise lol). I loved the way he was so protective of Sav even when he had to do it at a distance. I don't want to talk too much about what happens between them because I don't want to give spoilers so I'm just going to say that I'm pleased it wasn't a case of insta-love, they have known each other for years and their connection feels more real because of their shared history.

Overall, I'd recommend Crave to anyone who is looking for a good forbidden romance story. I have seen people complain about the ending but I actually thought it finished perfectly. The main story line was wrapped up well enough that I didn't want to scream in frustration but it still left me with questions that have me looking forward to the next instalment. Crave is a great debut, it's a promising start to Melissa Darnell's new series and one I definitely recommend.