Next week is the UK release of The Pack, the first book in Jason Starr's new urban fantasy series and thanks to Berkley UK (part of The Penguin Group) I have 5 copies to giveaway to some lucky UK winners! 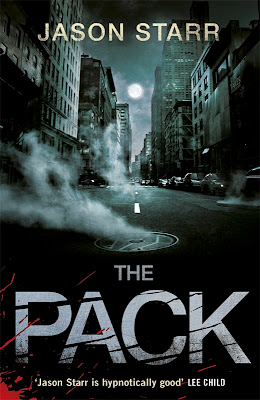 When Simon Burns is fired from his job without warning, he takes on the role of stay-at-home dad for his three-year-old son. But his reluctance pushes his already strained marriage to the limit. In the nestled playgrounds of the Upper West Side, Simon harbors a simmering rage at his boss's betrayal.

Things take a turn when he meets a tight-knit trio of dads at the playground. They are different from other men Simon has met, stronger and more confident, more at ease with the darker side of life- and soon Simon is lured into their mix. But after a guys' night out gets frighteningly out of hand, Simon feels himself sliding into a new nightmarish reality.

As he experiences disturbing changes in his body and his perceptions, he starts to suspect that when the guys welcomed him to their "pack", they were talking about much more than male bonding . . .

Check out this video of Jason Starr talking about the book for more information:

What do you think? If anyone has already read the book I'd love to know what you think of it.

Now how would you like the chance to win a copy of The Pack?