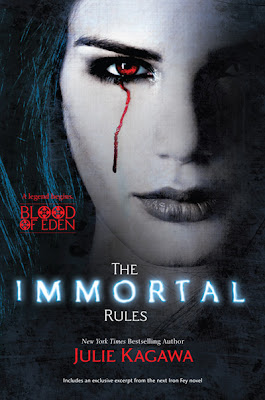 Allie Sekemoto survives in the Fringe, the outermost circle of a vampire city. By day, she and her crew scavenge for food. By night, any one of them could be eaten. Some days, all that drives Allie is her hatred of them - the vampires who killed her mother and instill fear in the repressed population.

But after a disastrous food expedition, Allie is forced to make the decision she hoped she'd never have to face - die, or become one of them. Faced with her own mortality, Allie becomes what she despises most - a vampire. To survive, she must work with her vampire creator and learn the rules of the immortal, including the most important: go long enough without human blood, and you will go mad.

When Allie is separated from her creator, she flees into the unknown, to the world beyond the wall of her vampire city. There she joins a ragged band of humans who don't know what she is. These humans seek a legend, a cure to the Red Lung virus that decimated the population and created the rabids, the mindless creatures responsible for spreading the infection. But does such a cure exist? And can Allie prevent her vampire urges from destroying her new found family?

Review:
Allie lives in a brutal futuristic world where a virus has wiped out the majority of the human population. The lack of humans to feed from caused vampires to come out of hiding and they have now taken control of the cities treating the remaining people as little more than cattle. People who are registered have to provide blood to the vampires and in exchange they are given a small amount of food to eat. Those who refuse to register live on the edges of society forced to steal and forage for food to survive but unable to leave the city for fear of the rabids (zombie like creatures) who are outside the city walls.

Allie hates the vampires and everything they stand for, she dreams of the humans rising up and fighting against them one day. Her life on the fringe of society is difficult but she has a crew who she lives with and they all help each other to survive. Then one day something terrible happens, an attack by the rabids leaves Allie with two choices - death or being turned into the thing she hates most. Although she hates the idea of becoming a vampire deep down Allie is a survivor so she takes the only option available to her. Forced to leave her home Allie is at the beginning of a difficult journey, she meets up with a group of humans who are searching for sanctuary but if they discover what she is they will never accept her.

The Immortal Rules is a fantastic start to Julie Kagawa's new series, the world she has created is dark and terrifying and it made a nice change to read about more traditional nasty vampires who look at humans as food. The world building was great giving enough information about the history to capture your interest and make it believable but not overwhelming the story with massive info dumps. I'm looking forward to discovering more as the series continues.

My favourite thing about the story was Allie though, she is a great heroine and one who always puts others before herself. When she was still human and living with her crew in the vampire city she looked out for the other members of the team and went hungry herself to make sure they had food too. Then once she has been changed she protects the human travellers that she meets even when she knows they would kill her if they discover her secret. I found it really interesting watching her try to come to terms with the fact that she has been changed into something that she has always hated, she has her opinions about vampires challenged but she has no doubt that she has been turned into a monster and she hates herself for it. I really want to find out more about Kanin, the vampire who changed her and hope he has a bigger part in the next book. I also loved Zeke who is second in command of the group that Allie meets on her journey.  It was nice to have hints of a possible romance but I'm glad that this didn't overtake the rest of the story.

Like I said I think The Immortal Rules is a fab start to the Blood of Eden series and it is a book I'd recommend to vampire fans and lovers of dystopian / post apocalyptic fiction. I can't wait for the next instalment!