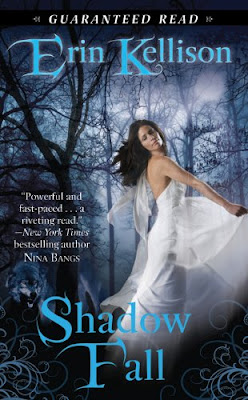 Sacrifice
Custo Santovari accepted pain, blood, even death, to save his best friend. But a man with all his sins just isn't cut out to be an angel.

Mystery
One moment he's fleeing Heaven: the next, he's waking up stark naked in Manhattan. In the middle of a war. Called there by a woman who's desperately afraid of the dark.

Shadow
It gathers around Annabella as she performs, filled with fantastic images of another world, bringing both a golden hero and a nightmare lover.

Wolf
He pursues her relentlessly, twisting her desires even as she gives herself to the man she loves. Because each of us has a wild side, and Annabella is about to unleash the beast.

Review:
I really enjoyed Shadow Bound so was looking forward to picking up Shadow Fall which is the second book in Erin Kellison's Shadow series. Please note that this review will contain slight spoilers for the first book in the series so please don't read further if you've not already read it.

I had expected the story to pick up immediately after the ending of Shadow Bound so it was quite a surprise when I discovered that two years had passed since the events in the first book. Custo was tortured and killed while protecting Adam and Talia from their enemies and doing so earned him a place in Heaven as an angel. He doesn't want to stay in Heaven though, the last thing he discovered before he died was that there was another traitor in the Segue Institute and he is determined to find a way to warn his best friend Adam that he is still in danger.

As Custo journeys through the Shadowlands trying to find his way back to earth he stumbles across Annabella. She is a ballet dancer who is so skilled that her dancing has opened a pathway between the two realms. But Custo isn't the only one who has spotted Annabella - she has also drawn the attention of a dangerous hunter who has now followed her to earth and is determined to claim her as his own. Can Custo protect her from Wolf and at the same time track down the traitor in the institute to make sure Adam and Talia are safe?

As much as I liked Shadow Bound I have to confess I wasn't a massive fan of Adam as the hero so I was pleased to discover that this was Custo's story because I already liked him a lot more. Custo went through hell to protect Adam and even died for his friend so I was already impressed by his bravery and the more I found out about him the better he got. Custo doesn't feel like he should be an angel, he has done things in his past that he isn't proud of and doesn't feel worthy but the more you find out about him the more you realise that he has always had honourable intentions. I liked the way Custo is so protective of his friends and also of Annabella but I really wanted him to put himself first just once, or for someone to stand up and fight for him for a change. He is so protective that it turns into more of a self destructive streak!

Although I like Custo more than Adam I didn't enjoy Shadow Fall as much as I enjoyed Shadow Bound. I think that was mainly because I didn't connect with Annabella in the slightest - I just couldn't believe how stupid she was to go off with Custo so quickly (literally the first time she meets him). When the heroine is so scared of the hero that she leaves a voice mail message telling people who she is with & where she was taken in case they find her body I find it hard to accept that she has the hots for him a few minutes later. I had to laugh when Custo called her sensible for making the phone call - OK so if she is murdered the police might be able to find her killer but that wouldn't make her any less dead would it? That hardly makes her sensible in my eyes! As much as I know Custo is the hero she didn't have a clue who he was and I lost all respect for her at that point and didn't get it back. I also found myself quickly getting bored with the descriptions of her dancing but that is probably because ballet is something that has never interested me in the slightest - I don't know the names of the dance moves so found it hard to picture the dances in my head. If you're a ballet fan then you would probably enjoy that part of the story a lot more than I did. The romance between them was so fast that I didn't find it even slightly believable and I just didn't feel enough of a connection between them to like them as a couple.

Unfortunately I was disappointed with Shadow Fall but I'm still curious enough about this series and the world that Erin Kellison has created to try the next book. I'm hoping that I'll enjoy the next instalment much more and am interested in finding out what happens with Adam, Talia and Custo even if I don't particularly care about Annabella. I'm also desperate to find out more about Shadowman who I fell for in the first book and love even more now.

Source: I was given a copy of this book at AADPhilly in exchange for an honest review