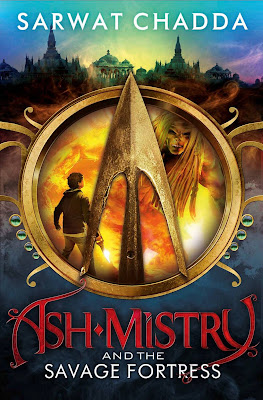 Varanasi: holy city of the Ganges.

In this land of ancient temples, incense and snake charmers…

Where the monsters and heroes of the past come to life…

One slightly geeky boy from our time…

IS GOING TO KICK SOME DEMON ASS.

Ash Mistry hates India. Which is a problem since his uncle has brought him and his annoying younger sister Lucky there to take up a dream job with the mysterious Lord Savage. But Ash immediately suspects something is very wrong with the eccentric millionaire. Soon, Ash finds himself in a desperate battle to stop Savage's master plan – the opening of the Iron Gates that have kept Ravana, the demon king, at bay for four millennia…

Review:
Ash and his sister Lucky are spending the summer holidays visiting their aunt and uncle in India. As a bit of a geek and a history buff Ash has been looking forward to exploring the temples and learning more about the culture but when the family are invited to a party hosted by the eccentric Lord Savage Ash ends up seeing more than he was supposed to. His uncle is offered a job by Savage but Ash is suspicious - some things are just too good to be true and he doesn't trust Savage. After a series of terrible events Ash and Lucky are in trouble and on the run - with Savage and his demon minions chasing them.

Ash Mistry and the Savage Fortress is the first book in a new series by Sarwat Chadda and is a fabulous action adventure story sure to appeal to boys and girls of all ages. Our main character Ash is a geeky 13 year old who is slightly on the chubby side and loves playing computer games with his friends. Ash is a reluctant hero who would rather go back to his old life in London than have to deal with Lord Savage and his demons but he steps up to the plate because there is no other option. I loved the relationship between Ash and Lucky, she may be his annoying little sister but he loves her and feels it is his duty to keep her safe. When Lucky is kidnapped Ash really starts to grow up as he fights to save her.

The story is action packed and full of Indian mythology that I found fascinating. I don't know a great deal about the various Hindu gods and goddesses so enjoyed finding out more about some of them. The plot is fast paced, full of gory battles with all kinds of frightening demons and monsters and had me on the edge of my seat. I can't wait to read Ash's next adventure and would highly recommend this first book to fans of Percy Jackson who are interested in learning more about Indian culture and mythology.