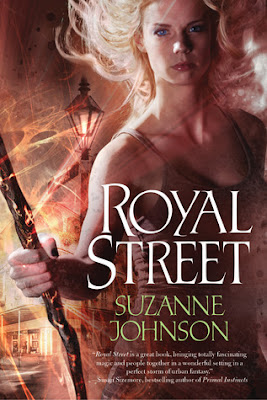 As the junior wizard sentinel for New Orleans, Drusilla Jaco's job involves a lot more potion-mixing and pixie-retrieval than sniffing out supernatural bad guys like rogue vampires and lethal were-creatures. DJ's boss and mentor, Gerald St. Simon, is the wizard tasked with protecting the city from anyone or anything that might slip over from the preternatural beyond.

While winds howled and Lake Pontchartrain surged, the borders between the modern city and the Otherworld crumbled. Now, the undead and the restless are roaming the Big Easy, and a serial killer with ties to voodoo is murdering the soldiers sent to help the city recover.

To make it worse, Gerry has gone missing, the wizards' Elders have assigned a grenade-toting assassin as DJ's new partner, and undead pirate Jean Lafitte wants to make her walk his plank. The search for Gerry and for the serial killer turns personal when DJ learns the hard way that loyalty requires sacrifice, allies come from the unlikeliest places, and duty mixed with love creates one bitter gumbo.

Review:
DJ is a wizard who works alongside her boss Gerry to protect New Orleans from the supernatural creatures that are able to cross over from the beyond. In the aftermath of Hurricane Katrina Gerry is missing and the boarders between worlds are thinner than ever, there is a serial killer on the loose and it is up to DJ to try and sort out the mess. The Elders have sent her a new partner to help but can she trust Alex or does he have his own agenda?

As a big urban fantasy fan I was drawn to Royal Street as soon as I saw the cover, DJ looks like she is going to be a kick-ass heroine and I was even more intrigued after reading the synopsis. I was a little bit nervous about a story written around a natural disaster like Hurricane Katrina, particularly a paranormal one because I thought it could have gone too far and made light of horrific events. In reality I felt that Suzanne Johnson tackled the subject with sensitivity and she really gives a feel for what people must have gone through both during the hurricane and in the aftermath. As someone who wasn't effected personally by the tragedy it really brought home just how bad things must have been in New Orleans at that time.

It would have been easy for the story to become bogged down in the distressing details of the hurricane but there was enough snarky banter between the characters to lighten the tone without being disrespectful. DJ isn't kick-ass in the same way that a lot of urban fantasy heroines are, she isn't the strongest physically and she doesn't have the kind of magical powers that are useful in a fight. In fact her skills lie with creating potions and charms so as long as she has time to prepare things in advance she is fine but it isn't so helpful when she comes under an unexpected attack. I actually quite liked the fact that she was more vulnerable than other heroines but there were times that she makes such stupid decisions that I wanted to shake her. She has some growing up to do and I hope we get to see that happen as the series continues.

When it comes to love interests we have several possibilities. The first one we are introduced to is the undead pirate Jean Lafitte, now we didn' t get to see as much of him as I was hoping for but he definitely has that bad boy vibe going for him and was deliciously dark. I hope he has a bigger role in future books. Then we have DJ's new partner Alex, he has less of a bad boy vibe but is still obviously keeping secrets, he is also very protective of DJ and I enjoyed the banter between the pair of them. Now I'm getting a bit fed up with love triangles so I wasn't particularly happy to find in this case we have what is quickly turning into a love square. Along with Lafitte and Alex you also have Alex's sexy war hero cousin Jake. Admittedly all three men are hot and they each have potential but I was frustrated by the way DJ was constantly flitting between them and it seemed like she was playing them off against each other. I actually felt quite sorry for both Alex and Jake and was a bit worried that she will end up causing a rift in their family.

Royal Street is the start of an urban fantasy series that has a lot of potential, there were some problems but I can see these being worked out over time and I'm definitely interested in reading River Road which is due to be published later this year. For a debut novel I was impressed with the world building, I enjoyed the mystery and although I did spot some of the twists in advance there were a few things that managed to surprise me. It will be interesting to see where Suzanne Johnson takes this series and I'm looking forward to seeing more of this world.