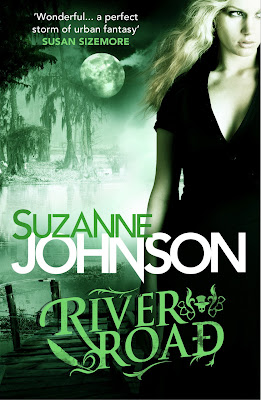 The hurricane may have passed, but in New Orleans the storm rages on.

With the borders between the city and the otherworld in ruins, new and dangerous species have swarmed into the waterways. There is talk of war between rival clans in the darkest depths of Louisiana's swamps and it falls to wizard sentinel Drusilla Jaco and her partner, Alex Warin, to keep the peace.

When wizards start dying and it becomes apparent that the waters of the mighty Mississippi itself have been poisoned, DJ will have to really focus if she is to find out who - or what - is responsible. And with an undead suitor, the amorous pirate Jean Lafitte, on her back that isn't going to be easy . . .

It's anything but smooth sailing in the bayou as the Sentinels of New Orleans series continues.

Review:
Three years on from the hurricane that devastated New Orleans and brought down the boarders between here and the otherworld wizard and Sentinel DJ is still trying to keep things running smoothly between the pretes (preternatural creatures) and the humans who have no idea of their existence. Along with her partner and fellow Sentinel Alex it is up to DJ to keep the humans in the dark and make sure the pretes don't get out of control so when the poison in the Mississippi threatens to cause a war between two different clans of merfolk they must work quickly to keep the peace. Add in the mysterious murder of a group of wizards and things are about to get even more complicated.

I have to admit that I was a little confused by the 3 year time jump from the end of Royal Street to the beginning of River Road, it took me a chapter or two to get my bearings but it didn't take long to realise how much sense it made. If the story had carried on directly it would have been hard not to focus on the aftermath of Katrina and the rebuilding of New Orleans and that would have taken the focus away from DJ's role as Sentinel. Although New Orleans hasn't been rebuilt to it's former glory at the time this story takes place enough of the rebuilding work has been completed that Suzanne Johnson is able to concentrate on the effects of the boarders between here and the otherworld being broken down.

As much as I enjoyed Royal Street there were a few things that irritated me, the main one being the love square that was forming between DJ, shapshifter Alex, Historical Undead pirate Jean Lafitte and Alex's cousin Jake. Although that square is definitely still in place I found myself enjoying it so much more in River Road, probably because it wasn't so much the main focus of the story. I have actually developed a little bit of a crush on all three of the men in DJ's life so I can understand why she is having difficulty figuring out her feelings - I do know which team I'm on though and after the way things ended I have high hopes that my favourite Alex is going to start pushing DJ for more in the next book! Each of the guys bring something different to the table though so it will be interesting to see which one manages to win DJ's heart, especially when she is working so hard to resist all of them because she is so afraid of losing yet another person that she loves.

The main focus of River Road is definitely on the different pretes and how they all interact with each other though. We get to find out a lot more about the Wizards and how they ended up pretty much taking charge of the other preternatural beings. Sentinels basically act as the supernatural police force so we get to see a lot more of Alex and DJ working together as they try to uncover who is behind poisoning the river. It was nice to see how well the pair of them get along now, after a rocky start they have become best friends and I really enjoyed the way they banter with each other but always have each others backs. It was good to see a few new species introduced into the series - you have the two different clans of merfolk, some highly sexed nymphs and we even get our first (but I have a feeling not our last!) elf sighting!

The Sentinels of New Orleans is developing into a fantastic urban fantasy series and one that I'm incredibly excited about continuing. I would recommend reading the series in order but as this is only the second book you have plenty of time to catch up before Elysian Fields is published sometime next year (I wasn't able to find a publishing date yet). If you like your urban fantasy full of drama, action and fun characters with snappy dialogue, great banter and just a hint of romance then you should be adding this to your to read list. If you enjoyed Royal Street then you're going to love River Road even more, Suzanne Johnson has definitely added her name to my must read list of authors after this one!

Other Reviews:
Lecture tout une Adventure
If you have reviewed this book on your blog please leave a link to your review in the comments & I'll add the link here.