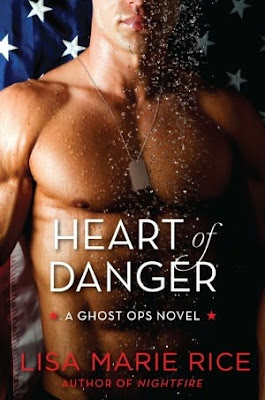 Ghost Ops. A small unit of super-elite soldiers so secret only two men know of their existence. Betrayed by their commanding officer while on an antiterrorist mission, the team is massacred. Only three survive—and find themselves framed and disgraced. But en route to the court martial, they escape . . . and disappear.

Beautiful, brilliant, and determined, Dr. Catherine Young is on a mission to find a man who has vanished into thin air. Walking into a high-tech hideaway bearing an essential message to Tom "Mac" McEnroe, Team Leader of the betrayed Ghost Ops force, is the most dangerous thing she has ever done. The soldier she encounters is frightening and suspicious, but her senses reveal the man underneath: tough, honorable, and so breathtakingly masculine Catherine feels weak in his presence . . . But to surrender to Mac's passionate desires would put her life in dire jeopardy. Catherine has a gift that enables her to see into the heart of others—and looking into Mac's is like staring into the very heart of danger itself.

Ghost Ops Series:
Heart of Danger
I Dream of Danger (2013)

Review:
Heart of Danger is the first book in Lisa Marie Rice's new Ghost Ops series and is a great introduction to the characters and the world they're living in. The Ghosts were an elite military group who carried out dangerous and secret missions but their last job went horribly wrong after they were betrayed by their commander. Only Mac, Jon and Nick survived the mission and after being set up to look like terrorists they are on the top of the government's most wanted list. The three of them are determined to prove their innocence and find out exactly how they were set up but in the meantime they have created an underground Haven for themselves and others who are in danger. The Haven is a top secret lair hidden within a mountain and Mac and the others will protect its inhabitants with their lives, they have built a small but thriving community where they can be self sufficient and remain under their enemies radar.

Dr Catherine Young works for a pharmaceutical company that is trying to find a cure for dementia and she works closely with patients who are taking part in a new drug trial. Thanks to her gift (or curse as she sees it) and her ability to feel people's emotions by touching them Catherine quickly realises that all is not what it seems with one of her patients. She risks everything when patient 9 asks her to track down Mac and his men and go to them for help. Mac is shocked at how easily Catherine finds the Haven, she should never have been able to get that close to their compound and he immediately suspects that she has been sent by their enemies to spy on them. The more he finds out about her the more he comes to believe her story and the Ghosts realise that everything they believed about the mission that went wrong was a lie and their former colleague is in great danger. Can Catherine help them to rescue patient 9 before he is killed by their enemies?

I'm going to admit that it was the cover that first brought my attention to Heart of Danger (well who wouldn't be drawn to it?!) but it was the blurb that convinced me I needed to read the book. I love this kind of series where you have a group of undercover military / ex-military alpha heroes who are trying to uncover who betrayed them. I can never resist an alpha hero but one of the things I love most is the sense of community that develops as you get to know the characters better throughout the series. The Haven is a great community, most of the inhabitants are civilians who found themselves in trouble by being brave enough to stand up against various forms of corruption. As a group they are wary of letting anyone new into the group but once they accept someone they become part of the family. Everyone brings their own unique skill set to the group and I'm looking forward to learning more about the inhabitant's stories in future books.

To get back to our main characters I have to say how much I loved Mac, he is smart, strong and incredibly protective of the community and those he cares about. He doesn't have to think twice before risking his own life to keep others safe and although he didn't want to be the group's leader he has stepped up to the role because they needed him to. When he falls for Catherine he falls hard and I love watching a growly alpha type who gets turned into a mushy teddy bear by his woman. I admired him for wanting to protect Catherine and keep her safely at Haven while he went to rescue patient 9 but I admired him even more for respecting that she was intelligent enough to be an asset to him and his team and to realise that they wouldn't be able to complete the rescue without her. It goes against all his instincts to take Catherine into a danger zone but he does it because he knows it is the only option. Catherine is a worthy heroine for Mac. She has always been isolated by her gift, even her family thought she was a freak and she has never really had any friends or close relationships. Her career means everything to her but she doesn't think twice about risking it all to help patient 9. She is compassionate, warm and loving and deserves to have someone who doesn't make her feel like a freak, someone who loves her for who and what she is and that is what she finds with Mac. I loved the way their relationship developed and you can expect to go on a sexy journey with them because their chemistry is combustible.

Overall Heart of Danger is a great start to the series and the story has everything you could wish for from this kind of romantic suspense - a group of swoonworthy alpha males (I can't wait for Jon and Nick's stories!) with access to all the guns and explosives they could possibly need, an action packed storyline, great romance with fab sexy times, interesting side characters that you want to learn more about and an evil villain who will turn your stomach with his horrible deeds. I can't wait to get my hands on I Dream of Danger and see what happens to the Ghosts next and I'd highly recommend this book to any fan of romantic suspense.