Review: Back to You - Priscilla Glenn 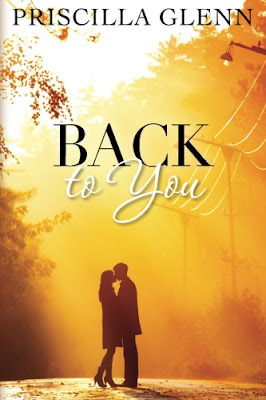 When Lauren Monroe first laid eyes on Michael Delaney back in high school, she had every reason to stay away from him; within minutes of their first encounter, his volatile actions confirmed his notorious reputation. But Lauren saw something in him that caused her to question his bad-boy persona, and against her better judgement she took a chance. She had no way of knowing that the unlikely friendship they formed would become so important to her.

Or that it would end so painfully.

Eight years later, when Lauren begins her new job at Learn and Grow Day Care, Michael is the last person she expects to see. Refusing to revisit the hurt and confusion of their past, Lauren vows to keep her distance from him. But staying away from Michael proves to be more difficult than she thought, despite her lingering grief and her instincts for self-preservation.

As Lauren and Michael recall the friendship that changed them forever and the events that tore them apart, will they finally be able to heal? Or will the ghosts of Michael’s past prove to be too much to overcome?

Review:
Lauren and Michael were unlikely friends back in high school, she was the good girl, the student who worked hard and always did her homework while Michael was the ultimate bad boy, always getting into fights and skipping more classes than he attended. Even though they were complete opposites they developed a strong friendship that lasted until Michael graduated and something happened to tear them apart. It has been eight years since they last saw each other and their lives have changed dramatically but no matter what happened between them in the past they are drawn towards each other again. Neither of them ever forgot their friendship or how much it used to meant to them but can Lauren ever trust Michael enough to give him her heart for the second time after he destroyed it so completely the first?

Back to You is told partly in the present where Lauren meets Michael again for the first time since he left high school. Lauren has just returned to her home town and is now working in a nursery school while she finishes her degree in child psychology. Michael is a single parent to an adorable three year old called Erin and he falls back into Lauren's life because she is Erin's new teacher. At the same time that we are following their current lives we also get to see how they met for the first time via flash backs to their time in school together. We know from the present that they had a big falling out but it takes quite a while to find out exactly what went wrong between them, they seemed so close that it was hard to imagine them no longer speaking to each other and I found it heart breaking watching as they destroyed their relationship in the past. Thankfully at the same time we are also seeing them work together to rebuild a fragile friendship eight years later.

I have to admit I fell for Michael right alongside Lauren both in the past and current story lines! At school he had the bad boy vibe going for him but I was also brought to tears a couple of times as we learnt about his childhood and the things he had been through. In the present he is a wonderful and caring father to Erin, he has grown up a lot since becoming a dad and is even more irresistible than he was before. Lauren is wary of giving into her feelings for Michael, she was devastated by his actions in the past and has never really got over what happened between them. It has made her distrustful of men in general and she struggles to let anyone close enough to build a relationship. Deep down Lauren has a lot of love to give though and it is impossible not to fall in love with Erin. The more time she spends with the little family the more she starts to have hopes for a future for the three of them.

I was impressed to find that Back to You is Priscilla Glenn's first novel, it doesn't read like a debut and that makes me feel even more excited to read more by her in the future. This is a wonderful romance and one I'd highly recommend both to older teens and to adults. As a side note to the author I just want to say how much I loved Adam and ask if we can please, please, please have his story in the future?! Priscilla Glenn is going to be an author to watch out for and I can't wait to see what she writes next.