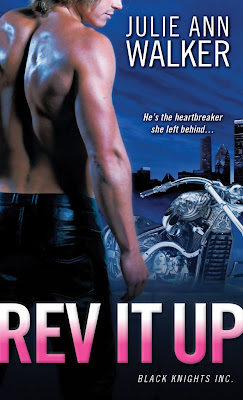 He Never Misses a Target

Jake "the Snake" Sommers earned his SEAL codename by striking quickly and quietly - and with lethal force. That's how he broke Michelle Carter's heart. It was the only way to keep her safe - from himself. Four long years later, Jake is determined to get a second chance. But to steal back into Michelle's loving arms, Jake is going to have to prove he can take things slow. Real slow...

She Aims to Make Him Beg

Michelle Carter has never forgiven Jake for being so cliché as to "love her and leave her." But when her brother, head of the Black Knights elite ops agency, ticks off the wrong mobster, she must do the unimaginable: place her life in Jake's hands. No matter what they call him, this man is far from cold-blooded. And once he's wrapped around her heart, he'll never let her go...

Review:
I have really enjoyed the previous stories in Julie Ann Walker's Black Knights Inc series but I have to say that Rev it Up was my favourite book so far and it has left me eagerly waiting for the next instalment. We met Shell in the previous book when she was introduced as Frank's sister, she is a single mum to her young son Franklin but we didn't really know much more about her background as Frank had worked hard to keep her out of his life at Black Knights Inc. When Shell introduced her to the rest of the group while Frank was in hospital she picked the wrong time to let people know about her connection to him. With a face from the past looking to get revenge on the team they have all had a price put on their heads and are now facing the constant threat of assassins trying to take them out. The Knights aren't too worried - their compound is secure and they all know how to look after themselves - but when they realise that the assassins have their families, and Shell in particular, in their sights things escalate into all out war.

Shell had her heart broken by Jake four years ago when he pushed her into the arms of one of his friends. She married Preacher but was left to raise her son alone when her husband was killed in action. Jake has always loved Shell but he had his reasons to push her away all those years ago and he has stayed away ever since because he blames himself for Preacher's death. He has never stopped loving her though and now that he has finally dealt with his inner demons he has come back to prove how much he cares and to convince her to give him a second chance. Shell is understandably wary of Jake, she never really got over him and refuses to let him break her heart all over again. She also has a very big secret that she is terrified he will uncover.

Jake may have acted like a complete ass when he walked away from Shell all those years ago but at least he has the balls to admit it and try to put things right between them. I have to admit I fell hard for Jake, he was so sweet and open with his feelings towards Shell that I just couldn't resist him. I loved that he was so understanding and patient with her as she kept pushing him away and that he was determined to break through her tough outer shell and show her how good things could be between them. The spark between them practically leapt off of the page and when they finally give into their passion it was well worth waiting for. I also have to mention that I loved little Franklin, he is such a cutie!

Along with the hot romance the story also has great friendship and banter amongst the team, we see more of the characters we already know and love and get to know some new faces too. I absolutely can't wait to read Rock and Vanessa's book - I can already tell they are going to be off the charts hot & I really do have a thing for a man with an accent so Rock already makes me melt! The action was great too, scenes towards the end were particularly dramatic and had me on the edge of my seat. Rev it Up was a fantastic instalment to a great series and I can't wait to read the next book!