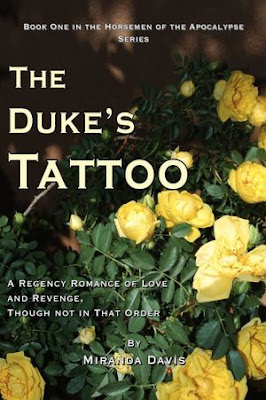 First comes revenge then comes love and marriage in The Duke’s Tattoo, a historical romance set in Regency England.

After being grievously wounded at Waterloo, Jeremy Maubrey returns from war to find his new life as the tenth Duke of Ainsworth painful, dull and full of obligations. That is, until he wakes to find himself indelibly decorated in a mortifying place and mocking manner.

Though he cannot recall much of the hellish night when he was abducted and tattooed, he cannot forget the waif-like villainess responsible or her haunting eyes.

Ducal duties must wait till he finds the culprit and takes his revenge.

Miss Prudence Haversham, Bath’s only female apothecary, knows she has a problem. A big, broad shouldered problem. At least she will have, if the tenth Duke of Ainsworth ever discovers she is to blame for tattooing him. Unfortunately, she meant to tattoo the previous Duke of Ainsworth, who tried to debauch her and disgraced her with his lies. Worse yet, she learns this duke is one of four infamously implacable cavalry officers known as ‘The Horsemen of the Apocalypse.’

No sooner has the vengeful duke traced his abductress to Bath, than Prudence Haversham overturns the duke’s every expectation and intention. In turn, the duke proves himself a surprisingly forgiving, honourable man who earns the wary apothecary’s love.

Horsemen of the Apocalypse Series:
The Duke's Tattoo
The Barron's Betrothal (2013)

Review:
I downloaded the free sample of The Duke's Tattoo on my kindle after reading my friend Catherine's fabulous review of the book on Goodreads. I just couldn't resist trying it and by the end of the first page I knew I had a must read book in my hands so I immediately purchased the full story. After all there aren't many books that open with the hero waking up one morning to discover a rather embarrassing tattoo framing his private parts! It would have been bad enough if Jeremy had had a few too many and decided to do something stupid but in fact he had been drugged, kidnapped and tattooed against his will and he doesn't have a clue who did it or why. Understandably put out by the whole affair Jeremy is determined to find out who the culprit was and make their life a misery.

Prudence hasn't set foot amongst London society since her reputation was unfairly besmirched by the Duke of Ainsworth. She has spent the last few years living peacefully in Bath and working as an apothecary but she has always longed to get revenge on the man who disgraced her. In fact Pru and her servants have spent many hours laughing as they came up with more and more ridiculous plots. When those servants happen to find the Duke stumbling out of his club alone one night it's the perfect opportunity for them to carry out their plans. Unfortunately by the time Pru realises they have the wrong man the damage has been done. Pru feels terrible about the mistake but is thankful that the Duke was drugged and has no way of discovering her identity. As you can probably guess Jeremy does uncover who was behind his attack and now it's his turn to plot his revenge. He still has no idea why Pru would have done such a thing but he is going to make her pay for her mistake.

What follows is an absolutely hilarious tale full of misunderstandings, guilt and unwanted attraction. The Duke's Tattoo is a delightful debut and it's been ages since I laughed this much when reading a book! The characters are wonderful, the interactions between Pru and Jem were fantastic and I loved the way their romance developed. Considering how they met it could have been difficult to create a relationship that I believed in but Miranda Davis had me so invested in both characters that I couldn't wait to see them have a happy ending. I can't tell you how happy I was to discover that this is the first book in a series and my only disappointment is that I have to wait until 2013 to get my hands on book 2 The Barron's Betrothal. If you're ready for a sweet and fun historical romance that will have you laughing until you cry then look no further because I can't recommend this book highly enough.