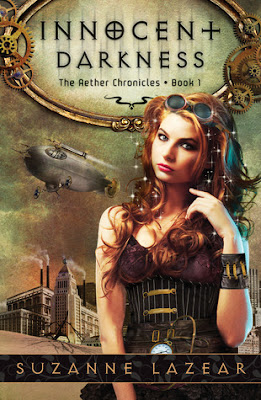 A steampunk faerie tale with romance, danger, and a strong-willed heroine

When spirited sixteen-year-old Noli Braddock and her best friend Steven "V" Darrow take a flying car out for a joyride, neither expects Noli to be sent to reform school to mend her hoyden ways. While at the dreadful school, Noli's innocent mid-summer's eve wish summons Kevighn, a mysterious man who takes Noli with him to the Realm of Faerie. At first Noli believes she has been rescued. But the sinister reason behind the handsome huntsman's appearance quickly become clear-he wants to use Noli as a blood sacrifice to restore his dying world. V, who has secrets of his own, shows up to help Noli escape and return to the mortal realm-but first, they must navigate the dangerous intrigues of the Otherworld.

If they are successful, Noli will live. But if Noli lives, the entire Otherworld civilization will die.

Review:
The thing that drew me to Innocent Darkness was the amazing cover - I think any steampunk fan would see that image and immediately want to read the book. While the story starts off well and has a nice steampunk feel to it with airships and flying cars unfortunately that disappears towards the middle of the book and left me feeling disappointed. Once Noli travels to the Otherworld (the land of the faeries) the only hint at steampunk is in the outfits worn by the inhabitants of faerie queen's court, I found it quite amusing that Noli was so shocked by the idea of women wearing corsets over their clothes or wearing bloomers - that is such a major part of steampunk style but for some reason wasn't something that was part of the human world.

Noli is described as strong-willed and intelligent, in fact when we first meet her she has just finished rebuilding her father's flying car and along with her best friend and neighbour V she takes it on an illegal flight across her neighbourhood. So we have a mischievous character who isn't afraid to break the rules - great news! Noli is sent to a reform school for being a "wilful hoyden" after the incident with the flying car gets her in trouble with the air police and this is where the story takes a turn towards the very dark and Gothic. The torture and abuse that goes on at the school is shocking and the fact that I'm sure this kind of thing did happen in the past just makes it all the more horrifying. Noli manages to remain strong in spite of everything she goes through and even makes plans to escape with her friend which I had to admire her for. Unfortunately as the story progresses Noli seems to lose both her independence and her intelligence, once she travels to the Otherworld she becomes completely dependent on Kevighn for everything. I couldn't understand why she continued to accept whatever he told her and even after she knew for sure that he had lied to her she was still drawn to him.

I had high hopes for the romance between Noli and V but I just couldn't understand what it was that drew her to Kevighn. We were repeatedly told that he cared for her but I just didn't see it and at no point did I believe there was any kind of connection between them. I think the whole love triangle trope is very overdone in YA fiction, very rarely an author manages to make it work but most of the time I'm finding myself rolling my eyes and feeling like it's just been thrown in there to tick a box on a form somewhere.

After a very promising first half I was disappointed with the second half of the story. In some ways it felt as if several different books had been cut in half and stitched together without any real connection between them. The fun and light hearted steampunk gave way to dark, Gothic historical fiction which then turned into a faerie story that could have been aimed at a much younger audience. The later part of the story was much slower paced and more predictable and I didn't enjoy it anywhere near as much as the beginning. I'm only relieved that the story didn't end with a major cliffhanger, there are still unanswered questions but nothing major enough that I feel compelled to pick up the sequel.