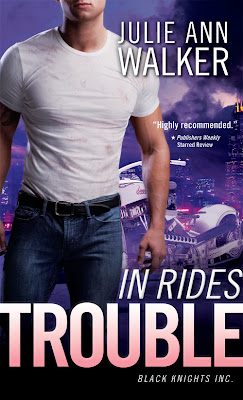 Rebel with a Cause

Becky "Rebel" Reichert never actually goes looking for trouble. It just has a tendency to find her. Like the day Frank Knight showed up at her door, wanting to use her motorcycle shop as a cover for his elite special ops team. But Becky prides herself on being able to hang with the big boys-she can weld, drive, and shoot just as well as any of them.

Man with a Mission

Munitions, missiles, and mayhem are Frank's way of life. The last thing the ex-SEAL wants is for one brash blonde to come within fifty feet of anything that goes boom. Yet it's just his rotten luck when she ends up in a hostage situation at sea. Come hell or high water, he will get her back-whether she says she needs him or not.

Review:
I really enjoyed Julie Ann Walker's debut Hell on Wheels so I was eager to continue reading about this group of ex-military, special ops experts who are now keeping things strictly on the down low by posing as motorcycle mechanics. We had already seen the mutual attraction between Frank (Boss) and Becky (Rebel) in the first book so I was looking forward to seeing if they would ever manage to work things out between them, thankfully I didn't have long to wait!

Becky is an expert mechanic and was the brains behind the custom motorbike shop that Frank bought into to use as cover for his covert team. Becky has spent 3 years working and living alongside Frank and his men and although she thinks of them all as family it is Frank who stole her heart. She is appreciated by the guys when it comes to her skills with a motorbike but she is sick of watching from the sidelines while the others put their lives at risk - she wants to be a full member of the team and that means becoming an operator herself. She has the support of most of the guys who have all been working with her in secret for months and helping her train but when Frank discovers what she has been up to he is livid. He knows he is too old for Becky and he doesn't make good boyfriend material but he still cares about her and there is no way he'll let her put herself in danger. Frank has told Becky in no uncertain terms that she will never be a part of his team and that there can never be more than friendship between them. Devastated by his outburst Becky decides she needs to get as far away from the infuriating man as possible so she can mend her broken heart and decide what to do with her future. The last thing she expects when she sets sail around the world with her friend is to be kidnapped by Somalian pirates. Held hostage and terrified for her life Becky knows if she can just hold on long enough Frank and the boys will find her, but can they get to her in time?

In Rides Trouble is another fantastic instalment to the Black Knights, Inc. series. I really liked the love / hate, will they / won't they pull between Frank and Becky, the banter between them is hilarious as Becky deliberately tries to poke Frank to get a reaction from him. You can tell that they both adore each other but neither of them wants to be the first to admit it and Frank in particular keeps coming up with reasons why they shouldn't be together. We also get to spend a lot more time with the rest of the team and continue getting to know everyone. I absolutely loved new team member Angel, the way he muscled in between Becky and Frank was hilarious to watch and I really hope he gets his own story soon. I also loved the connection between Becky and her brother Wild Bill. Bill comes across as so calm and composed even when his sister is in danger but you can tell that under the surface he is about to boil over and I have a feeling he is going to have an explosive connection with his lady when we get to his book. It was really funny to watch Bill talk to Frank about his feelings for Becky and I was impressed with the way he forced Frank to take a long hard look at himself and consider his actions more carefully.

I love the fact that this series blends romance and action together, the story line with the pirates was the last thing I expected but I really enjoyed it. It was great to see another side to the team and understand more about the work that they do and also to see how they all work so well together and have each others backs. We may have to wait a while for things to heat up between Frank and Becky but it was well worth the wait and they have a fab connection and chemistry. This is a fast paced series full of intrigue, action, alpha males and scorching sex scenes and I can't wait to read the next instalment.