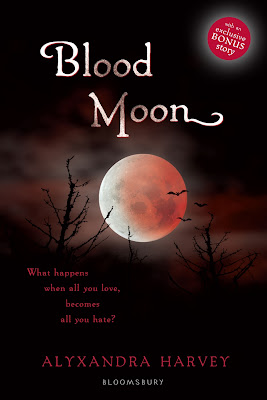 'I can still taste his blood, Lucy. I can smell it everywhere. It's in the grass, in the air, on me. I'm not safe.'

When the vampire tribes convene for the rare Blood Moon ceremonies, Solange Drake is plunged into a battle with her feral nature. The Drake brothers have been raised knowing they had to protect their younger sister at all cost. But forbidden magic and a mysterious stranger have put all of them in terrible danger. Nicholas is going to have to make a difficult choice: between his girlfriend, Lucy, and his little sister, Solange - blood, or love?

Review:
This is the 5th book in the Drake Chronicles so please be aware that this review will contain spoilers for previous books. Blood Moon is another fab instalment to a series I love though so if you haven't started it yet grab a copy of My Love Lies Bleeding (called Hearts at Stake in the US) now. If you're not up to date with the series then you should stop reading this review now so you don't pick up spoilers.

Anyone who read Bleeding Hearts was probably as shocked by Solange's behaviour as I was, she was acting very out of character and the ending left me really concerned about her. In Blood Moon she continues to do the unexpected and there were actually times where I found myself not liking the new Solange at all. I'm glad to say that there are reasons for what is happening though, I'm not going to say what or why but by the time you reach the end of the book you'll have a lot of answers. You'll also be left with questions though and this cliffhanger ending was just as bad as the last one! It really is going to be a long wait until the next book.

One of my favourite couples in this series has always been Lucy and Nicholas so it was great that they get to play such a big part of this book. The story is narrated by them as well as Solange but it was by far their parts that I enjoyed the most. Lucy never fails to make me laugh out loud and I just love any scene that contains both her and Nicholas in it. Watching Lucy try to adjust to life at the Helios-Ra school is quite amusing, she has never been one to do what she is told so she finds the strict rules hard to stick to. After the way Solange treated her in the last book I wouldn't have blamed Lucy if she had given up on her friend but Lucy proves her loyalty again and again in this book. She is incredibly worried about Solange and she cares a lot about all of the Drakes so she is determined to get to the bottom of what is going on.

Nicholas finds himself in an incredibly difficult situation as he has to make choices between his baby sister and his girlfriend. Loyalty is tested all around and things will never be quite the same amongst the Drake family after the latest events. I really have no idea how Alyxandra Harvey will resolve things in the next book but I can't wait to find out! Fans of the series will love Blood Moon, it has everything you'd expect from these books - humour, action, romance, family bonds and loyalty.

As an extra bonus the UK paperback includes the Lost Girls novella which tells the story of how Liam and Helena first met. I don't want to say much about the story because it would be too easy to give spoilers but I really enjoyed getting to see them both before they married and had the children. It's easy to see them just as parents in the rest of the series and not think about the lives they had before they met so I liked this extra side to them. It was also great to get a better idea of how and why Helena became the kick ass mum that she is now.