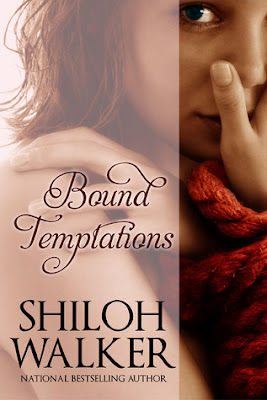 BOUND TEMPTATIONS contains two stories, BEG ME and TEMPT ME, two stories that are available separately in ebook. This is their first time releasing in print.

TEMPT ME
She's a temptation he can't resist...

Roxanne ‘Rocki' Monroe's life is full of secrets and hidden heartaches. Cole Stanton would love to heal her pain and chase away the ghosts of her past, but she's just a complication he doesn't have room for in his life.

Or so he thinks.

It doesn't take Cole long to realise he's more than willing to let temptation get the best of him, more than happy to deal with complications if that's what it takes to get her.

BEG ME
Beg me...there had been a time when those words made her burn with desire. But now, there was only fear.

Once, Tania Sinclair's life was almost perfect...oh, it had its ups and downs but she was happily married to a guy that adored her, one who had no problem indulging every kinky fantasy she ever had. But a couple of tragedies later, she's barely holding it together. A car accident took away her husband, and an attack from somebody she should have been able to trust has shaken not only her confidence, but it's also stripped away her fantasies and even made it painful to look back on her memories of her husband without fear.

Two years after her attack, Tania is determined to take her life back and the first step is taking back herself...her fantasies, her dreams, her memories. There's only one person she can trust to do it, too. One person she wants enough...Drake Bennett, her husband's best friend.

Falling for your best friend's wife-never smart. Drake's watched Tania quietly for years, watched her...wanted her, knowing he'd never have her. First, she was taken. And then, that night two years ago-a night that still scars her, a night that's left bruises on her that still haven't healed. He does what he can, though, because he loves her too much not to. He's her friend, there when she needs him.

And now she needs him. She's asked him for a favour...one that just about blows his mind...

Warning: This book involves light bondage play, rape fantasy & role-playing. The acts between the hero & heroine are consensual, but they may not be ideal for all readers...

Review:
The Bound Temptations anthology contains two novellas (Tempt Me and Beg Me) by Shiloh Walker that have both been previously released as ebooks. I'm going to talk about each of these stories individually in this review. Overall though I'd have to say that I liked the anthology but I didn't enjoy it as much as I expected to. I quite liked Tempt Me but I'm afraid I wasn't a big fan of Beg Me.

This was my favourite of the two stories. I really liked Rocki, she is the widow of a policeman who now runs her own lingerie store, life has been hard but she is ready to move on and find love again. I loved the fact that she isn't a skinny supermodel type, she has curves and is happy and confident about her fuller figure that she shows off wearing the corsets and the other lingerie she sells in her store. It's so nice to read about a woman who has no insecurities about her body and it was one of the things that drew Cole to her.

Unfortunately I wasn't as keen on Cole, he starts the story engaged to ice cold bitch Mara. Now as much as I hated Mara with a passion and felt she deserved to be kicked to the kerb it irritated me that Cole is completely oblivious to how awful she is until he is attracted to another woman. Suddenly after one meeting with Rocki he realises what a cow his fiancee is and decides to dump her. Then before you know it Rocki (who is still nursing a broken heart for the husband who died 5 years ago - she even wears her wedding ring still) and Cole are madly in love despite the fact they've only met a handful of times and been on a couple of dates. I know things have to move fast in a novella but that was just too fast for me and didn't make it believable. The story had real potential but I felt it could have been so much better if it had been given more page time.

Now, I'll admit that if I'd realised the contents of this story before I picked the anthology up I probably wouldn't have read it so I'm not really the best person to judge this one. I'm not a fan of rape fantasies but I decided to give it a try because I like the author's writing style. I did like Tania at first, she had been through a horrible ordeal after the death of her husband and then being raped in her own home and I felt really bad for her. I can't even begin to imagine how messed up that would have left her and I admired her for wanting to take her life back and replace the bad memories with good ones. Drake was her husbands best friend and has been in love with Tania forever, he has always been there for her and was understandably the first one that she turned to.

Now I consider myself quite an open minded person and although Tania's fantasy isn't my idea of fun I don't have a problem with it as long as the people involved are consenting adults. The bondage side to their relationship and the dirty talk was fine and was even quite hot in places but events towards the end left me cold. Where it went wrong for me was when Tania practically forced Drake to do something that he was obviously very uncomfortable with - she was trying to wipe away the memories of her own rape which I can understand to a degree but that doesn't give her the right to force the man she is supposed to be falling for into doing something that hurt him emotionally. I felt so bad for Drake, he loves Tania so much that he would do anything for her and I felt she took advantage of that and it really made me dislike her. That scene ruined the whole novella for me which was such a shame.