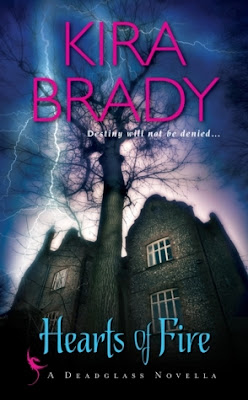 In the prequel to a stunning new paranormal series, one woman’s desire for a forbidden man will spark a centuries-long supernatural conflict—and a love nothing can destroy.

She’s the heiress to Seattle’s most powerful shifter clan. Her destiny is as controlled and certain as moonrise. However, from the moment Alice Corbette encounters the man known as Brand, she will defy all constraint and break every rule to make this dragon-shifter hers. Brand is determined to repay the clan leader he owes his life to. But one taste of Alice’s exquisite spirit will make him question his loyalty—and plunge them both into the middle of a ruthless power play. Their only chance at freedom is a gamble that could risk the future of humans and shifters alike . . .

Review:
Hearts of Fire is a prequel novella for Kira Brady's new Deadglass series, the first full length book Hearts of Darkness will be published in August. As a prequel this story definitely did the job of creating excitement for the series, I'm intrigued by the world building and definitely want to learn more about both the Kivati and the Drekar.

The Kivati are a race of shapeshifters who have made their home in Seattle and worked hard to build a life where they can live in secret amongst the human population. There are a lot of different animal tribes amongst them but their leader, Halian, is a raven shifter. When a group of newcomers arrive from Sweden the Kivati can sense that they are not human but the Drekar (dragon shifters) are not forthcoming about what they actually are. The Kivati and Drekar have been natural enemies for years so things aren't going to go well when the Kivati find out more about the new arrivals.

Halian's daughter Alice is immediately drawn to new arrival Brand, she knows in her heart that they are meant to be together and Brand feels the same way. I would have liked their romance to have been drawn out a little longer but I can understand why there wasn't time to do that in a short novella. It would have been nice to see the couple get to know each other better though, as it felt more like they were in lust than actually in love. I'm hoping that we will get to see more of them in future novels though because I did like them both and would like to see what happened to them after the end of this story.

Overall I thought this was an interesting start to the series and it was enough for me to add Hearts of Darkness to my wish list. I have a lot of questions regarding the Deadglass that was created by Brand's father (I'm assuming this will be important considering the series title!) but also about the different kinds of shapeshifters we were introduced to. I've always had a soft spot for dragons so I'm excited about seeing more of them!