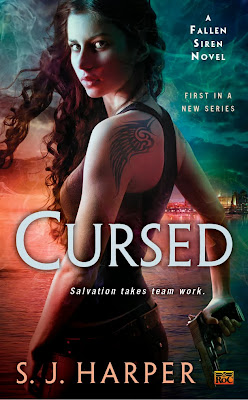 She’s cursed. He’s damned. Together, they make one hell of a team.

Emma Monroe is a Siren, cursed by the gods and bound to earth to atone for an ancient failure. She’s had many names and many lives, but only one mission: redemption. Now that she works missing persons cases for the FBI, it could be just a rescue away. Unless her new partner leads her astray.

Special Agent Zack Armstrong just transferred into the San Diego Field Office. He’s a werewolf, doing his best to beat back the demons from his dark and dangerous past. As a former Black Ops sniper, he’s taken enough lives. Now he’s doing penance by saving them.

Emma and Zack’s very first case draws them deep into the realm of the paranormal and forces them to use their own supernatural abilities. But that leaves each of them vulnerable, and there are lines partners should not cross. As secrets are revealed and more women go missing, one thing becomes clear: as they race to save the victims, Emma and Zack risk losing themselves.

Review:
Emma is an immortal siren, cursed by the Goddess Demeter for failing to protect Persephone from Hades, she is forced to remain on earth until she has atoned for her sin. Emma must protect the innocent to redeem herself and she is forbidden from finding love and happiness until Demeter agrees that she has suffered enough. Zack has just transferred to Emma's FBI office and become her new partner, Emma knows that Zack is a werewolf but he has no idea that she is even aware of the supernatural community, let alone that she isn't human. Their latest investigation starts out as a simple missing person case but soon becomes a whole lot more complicated when they uncover more victims and realise that none of them were quite what they seemed. Working so closely together makes it very difficult for them to keep their secrets, especially when their case drags them deep into the supernatural community, but can they trust each other enough to share the full truth?

S.J. Harper is the pen name of the two authors Samantha Sommersby and Jeanne C. Stein, I hadn't actually read works by either of these authors before but having really enjoyed their collaboration I'll definitely be checking out some of their individual works in the future. Cursed is a great start to a new urban fantasy series and I'm already looking forward to getting my hands on the next book. I really liked both of the main characters and I enjoyed learning about the world the authors have created. The mystery was solid and kept my interest throughout and I hadn't guessed the who or why until quite near the end of the story.

Emma has spent centuries suffering for her failure to protect Persephone, she has no idea how far away she is from redemption and just has to keep on doing her best to protect the innocent in the hope that she will finally be given her freedom. She knows the cost of letting anyone get to close to her and it isn't something that she is prepared to let happen again so no matter how attracted she is to Zack she is determined not to act on it. Zack on the other hand knows exactly how good he and Emma are together and wants them to pursue a relationship, he doesn't understand her reluctance and finds it frustrating. They have a great working relationship and quickly become friends but he wants much more than that with her and he is a very difficult man to resist! I loved the will they / won't they element to their relationship, even though you know they could be great together we understand exactly what the stakes are and the odds are against them. I did find myself a little frustrated that Emma wouldn't be more upfront with Zack about the real reasons they couldn't be together but I could understand her fears and see why she kept her secrets so close to her chest. I have high hopes for the two of them in the future but I have no idea how they'll actually manage to get around Demeter's curse.

Alongside Emma and Zack we are introduced to some interesting side characters, particularly Emma's best friend Liz who is a powerful witch and a helpful ally. I'm also incredibly intrigued by a certain vampire and I'm wondering if Emma's sisters may have a role to play in future books. I'm looking forward to learning more about Zack's reasons for leaving his pack and moving to San Diego, and it will be interesting to see how things play out with his stalker ex-girlfriend too. Cursed is definitely an interesting start to the series and I have high hopes for future instalments. I just hope we don't have to wait too long for the next book to be released! 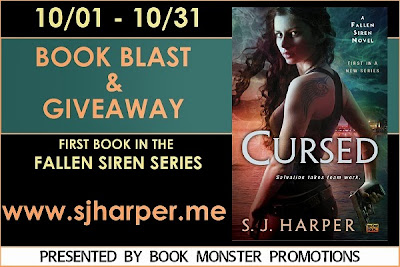 As part of the Cursed blog tour S.J. Harper is giving away a $25 Amazon gift card to one lucky winner. You can enter the giveaway using the rafflecopter form below, the winner will be contacted directly by S.J. Harper so they can arrange sending the prize.