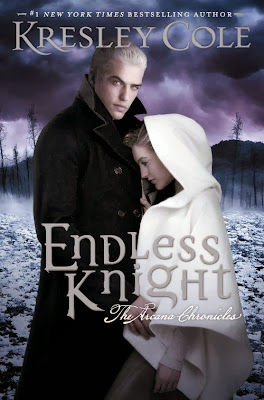 When your world has disappeared, is there anything left to fight for?

Evie has now come into her powers as the Tarot Empress. And Jack was there to see it all. Evie realises that there is a war brewing, and the teens that have been reincarnated as the tarot are in the throes of an epic battle. It's kill or be killed.

Then Evie meets Death, the gorgeous and dangerous Endless Knight. Somehow the Empress and Death share a romantic history. A history that Evie can't remember and Death can't forget. She is drawn to Death, but in love with Jack.

Evie is determined to discover why she's been granted these powers, but is struggling to accept her place in the prophecy that holds the future of mankind in the balance. Survival may mean betraying the ones you love . . . Will following her heart lead to her demise?

Review:
Poison Princess was one of my favourite books last year so Endless Knight was one of my most anticipated novels of 2013. I went into this book with HUGE expectations and found it just as impossible to put down as the first book. I love the world that Kresley Cole has created here, I love the dark post-apocalyptic setting and I love the fact that the characters are based on Tarot cards and all have different supernatural abilities. It's just so refreshing to come across something so different and I'm loving every minute of it. If I had one complaint it would be the killer cliffhanger ending, seriously if you thought the ending to Poison Princess was bad you've not seen anything yet and I literally wanted to scream with frustration when I turned the last page! I had to sit there for a few minutes with my mouth hanging open trying to compose myself and I'm still feeling the book hangover more than a week after I finished the book.

Endless Knight picks up immediately after Poison Princess ended and this is a series you definitely need to read in order. I'm assuming that anyone who is reading this review has already read the first book so if you haven't look away now. Evie has changed a lot from the girl we first met, she has grown up but she has also started to learn the full extent of her powers. She never asked to be a part of this game and the last thing she wants is to become a murderer but she won't back away when it comes to protecting herself or those she cares about. Jack is shocked by the changes he sees in her and her power scares him which causes some problems between them. I'll admit I was a little disappointed with his reaction to her at first but at the same time I could understand it. I missed the banter between them though so I was glad Jack was able to work through his issues and start building bridges. The chemistry between him and Evie is fantastic and his accent always makes me swoon.

I've loved Jack from the beginning so I'm going to be upfront and admit that I was disappointed when it became clear that there was going to be a love triangle in the series. I really didn't like Death to start with, he's cocky and arrogant and seems very cold and unfeeling but as the story progressed and we got to know him a little better I was surprised to find myself warming to him. He has a long and tortured history with the Empress and as Evie starts to recover the memories from her past lives we see just how much they were both effected by that. Deep down Death actually has a vulnerable and caring side, he keeps it well hidden but it's definitely there and anyone who loves a good tortured bad boy is going to find that hard to resist. I think overall I'm still on team Jack but you know what I don't think it would actually take too much to sway me to the other side. I went back and forth between the two of them and I can definitely see the appeal for either. We see so many triangles but rarely are they done this well and for once I'm not holding it as a negative against the story (if you've read any of my other reviews you'll know that is incredibly unusual!).

I think the plot of Endless Knight was even darker than that of Poison Princess, Kresley Cole isn't afraid to take her characters to dark places with little hope of survival and she threw in just as many plot twists in the sequel as she did in the first book. I have a huge suspicion about something I think is going to happen in the next book and I'm dying to know if I'm right or not! If it hadn't been for that pesky little thing called sleep I would easily have devoured this whole book in one sitting so I would recommend starting it when you know you have a good few hours to spare (you'll thank me for that suggestion trust me!). Considering my high expectations for this story I'm amazed that the author not only met them but she actually surpassed them and blew me away. My only disappointment is that we're going to have another year long wait for the next book - the anticipation may just kill me but if I survive the wait I'm sure it will be worth it!

Source: Ebook received from the author in exchange for an honest review, I was also sent a print copy by Simon & Schuster.