Review: The Falconer - Elizabeth May 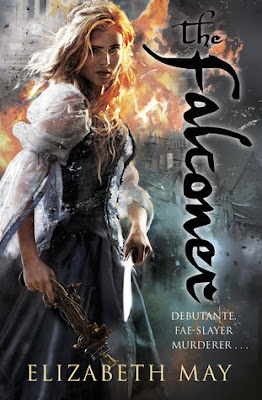 Lady Aileana Kameron was destined for a life which revolved around Edinburgh's social events - until the moment a faery killed her mother.

Now, between high society balls, Aileana slaughters faeries in secret. Every night, armed with modified percussion pistols, explosives and a killer instinct, she sheds her aristocratic façade and goes hunting.

She's looking for revenge, but she'll kill any fae that crosses her path.

But there's another battle looming - one her mysterious mentor, Kiaran MacKay won't even talk about and it has world-altering consequences.

Aileana will have to decide how much she's willing to lose - and just how far she'll go to avenge her mother.

The Falconer Series:
The Falconer
Further titles and release dates to be confirmed

Review:
Since the day that Aileana witnessed her mother's murder she has been aware of the faeries that walk amongst us unseen by most humans. At a time in her life when she should be focusing on attending balls and attracting a wealthy husband she is leading a secret double life. While pretending to act like the young lady she was brought up to be she sneaks out at night to hunt and kill the fae with the help of her mentor Kiaran. What she wants most is to track down the faery who killed her mother so that she can have her revenge. It isn't easy keeping her night time activities a secret and she knows that if she is caught she will lose her reputation and be shunned by polite society but that's a risk she is willing to take if it means stopping the fae from killing more innocent victims.

There has been a lot of hype surrounding Elizabeth May's debut novel The Falconer and it's been at the top of my wish list since I first heard about it. Just one look at that stunning cover and I was sold but the blurb hooked me even more especially when I heard Aileana compared to one of Buffy's ancestors who fights the fae instead of vampires. I'll admit I was a little nervous that it wouldn't live up to my expectations but I'm very happy to say that this is a fabulous start to a new series and it's one I can't wait to continue. The Falconer is historical urban fantasy at it's best with a strong, kick-ass heroine, a rich historical setting and plenty of action. It also has a hint of steampunk in the weapons and gadgets that Aileana has designed to help her fight the much stronger, faster fae.

Aileana is a fabulous heroine, she has changed a lot since witnessing her mother's murder and is no longer the spoilt young lady that she once was. She has started to realise how trivial her life used to be, how unimportant balls and afternoon teas really are and how little she cares about finding a suitable husband and getting married. She has more important things to worry about like protecting the city from the murderous fae that seem to be arriving in greater numbers every day. It is very difficult for her to keep quiet about her secret life, especially when the gossips are all talking about her behind her back because of the circumstances surrounding her mother's death. She finds it difficult to hold her tongue but knows that nobody would believe her even if she did tell them what really happened. Aileana has had to learn to become tough, she has put a lot of effort into learning to fight and into creating the weapons she now uses to hunt. Her mentor Kiaran has secrets of his own and she isn't sure how much she can trust him but she didn't have anyone else to turn to for help so they have formed an uneasy alliance.

As much as I loved Aileana I also really enjoyed getting to know the side characters too. I'm incredibly curious about Kiaran and can't wait to learn more about him but I think Derrick, the honey drinking pixie, was probably my favourite, he was always amusing and added a nice bit of comic relief to the story. Where The Falconer really excels is in it's fight scenes, the fae that Aileana must battle against were creepy and well described and it was easy to picture yourself in the middle of the story. I don't want to say too much about the plot because I think it's better to let things unfold as you're reading but I really enjoyed Elizabeth May's take on faerie mythology and I'm definitely looking forward to finding out how events unfold as the series continues. I will warn you now that the story has quite an evil cliffhanger but I was enjoying the book so much that I can't really mark it down for that. The Falconer really is a fantastic debut and one I'd highly recommend to fans of urban fantasy with a historical setting, Elizabeth May is definitely an author to watch out for!