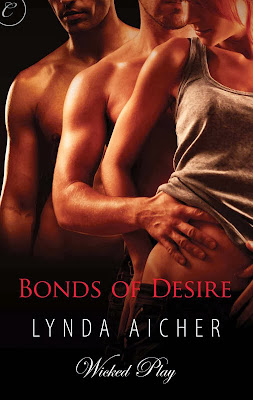 Lawyer Allison English never planned to return to The Den—despite her naughty fantasies about being bound by owner Seth Matthews. But when club guest Tyler Wysong is injured in a scene, Seth turns to Allie for help. Aroused by both men, Allie should turn the case down. But she can't… . . .

After his bad experience, Tyler has no interest in being with another Dom. Yet he can't deny his attraction to Master Seth. When Seth offers him a place to stay, Tyler agrees—if Allie will stay too. But what good is a chaperone who adds to his temptation?

Living with two subs brings out Seth's protective instincts, though Allie insists she's not into the lifestyle, and Tyler swears he's done with it. But the chemistry between the trio prompts them to agree to submit to him for one week, and he'll show them both the true pleasure that a Dom can provide.

The intimacy could break them all, or bind them together forever . . .

Review:
Bonds of Desire is the third book in Lynda Aicher's Wicked Play series and I have to say it was also my favourite. We have already met both Allie and Seth in previous books, not only are they friends with the previous main characters but Seth is also the third owner of The Den.

Allie has been secretly fantasising about submitting to Seth since she first visited The Den with Kendra and Cali but she has no intention of taking it any further. She is just too focused on her career to take time out for a relationship right now. But when Tyler is injured in the club Seth asks her to step in and help protect Tyler's legal rights and after seeing what happened to him she is unable to refuse. Tyler is wary of being around another Dom but he badly needs a place to stay while he recuperates and agrees to move in with Seth temporarily but only if Allie will stay with them too. All of them are attracted to each other but all have very good reasons to avoid getting involved, especially in something as complicated as a threesome. As their attraction grows Seth helps to show both Allie and Tyler how good life can be with a real Dom but can they find a way to make their relationship work on a more permanent basis?

I think what I liked most about Seth was how much he genuinely cared for both Tyler and Allie. He was horrified that Tyler had been so badly injured and wanted to help him press charges against his abuser, not because he was worried about the club's reputation but because he was so disgusted by the other man's actions. You do have to suspend belief a little to accept that Tyler would be ready to even attempt a sexual relationship with Allie and Seth quite as quickly as he does but I can forgive that in fiction, especially when they were all so well suited to each other. They all bring different personality traits to the relationship and I honestly felt they were stronger as a threesome than they were as individuals or split into any form of couple. I believed in the connection between them and lets face it Allie is one lucky lady because Seth and Tyler were both incredibly hot!