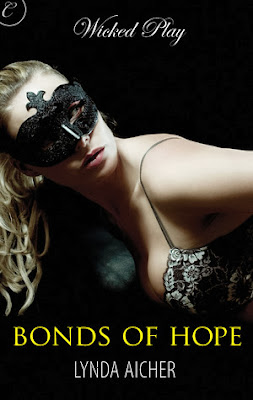 Quinn's been taking direction all her life, so submitting to a Dom comes easily. But it's not just the most amazing sex she's ever had—Marcus challenges her to define her own needs and make her own decisions. And when her training is over, Quinn will have to choose between continuing to play a part in her own life, or living by her own rules.

Review:
Actress Quinn has lived her whole life in the public spotlight, looking to lose her good girl image she has agreed to star as a submissive in a new TV show but the problem is that she knows nothing of the BDSM lifestyle. In order to make her role believable she has signed up for a week of intensive lessons at her local sex club, The Den. Marcus is the Dom who is in control of teaching Quinn to be the perfect submissive and he is convinced that it is more than just a job to her. He is determined to unlock her inner desires and make her realise what she has been missing out on but with her whole life scrutinised by the public will Quinn be brave enough to admit what she really wants?

Bonds of Hope is the fourth book in the Wicked Play series and although each story works as a stand alone I'd happily recommend reading all of them. I have become a big fan of this series and the author's writing style and I hope we have lots more books to come about these characters in the future. Marcus is one of the newer owners of The Den but he has worked there since it's opening six years ago and is a trusted and popular Dom. He is a very easy character to like, he is comfortable with who and what he is and doesn't feel the need to explain himself or his actions to anyone. At first he isn't keen on the idea of training an actress but from the moment he meets Quinn he can't deny his attraction to her. He senses her submissive side but it is hard for him to tell when she is playing a role and when she is just being herself. She intrigues him though and he wants to get to know the real person she is inside rather than the front that she shows to the world. I loved the fact that Marcus doesn't try to deny his feelings or push her away when he starts to care about her, he knows what he wants and he just has to figure out a way to get Quinn to agree to be his permanent submissive.

I had mixed feelings about Quinn at first, she comes across as quite naive and judgemental at first so I wasn't sure if I was going to like her. She actually started to grow on me quite quickly though, it doesn't take long for you to see that she has a lot of inner strength when you look beyond the surface. She is actually a lot braver than I gave her credit for and it was interesting seeing her start to realise how much power she had. She has spent a long time letting other people run her life for her, from her controlling mother to her publicist and manager she has let other people dictate her actions without really considering why she didn't make her own choices. As she spends more time with Marcus and she learns a lot about herself and does a lot of growing up, she changes a great deal and actually starts to stand up and make her own plans for her future.

If you've read any of the other books in this series you'll know to expect plenty of hot sex in Bonds of Hope, Marcus certainly knows his way around a flogger and he is happy to teach Quinn everything he knows about sexual submission! The scenes in the club aren't the only ones though and I think some of my favourites were when the couple were in the privacy of Marcus's apartment. I enjoyed the character development and the way they were both prepared to make compromises so they could be a couple, they both have to overcome their jealousy over each other's respective jobs but I was pleased this was something they could discuss like adults before making a decision. There was one thing that I wasn't a huge fan of but I can't really talk about that without spoilers so I'm not going to go into details here, I just felt that it forced their issues somewhat and I would have preferred them to have dealt with things without that hanging over their heads. That was a fairly minor problem though and overall I found myself really enjoying their story. This is another solid instalment to the series and one I'm sure fans will enjoy.