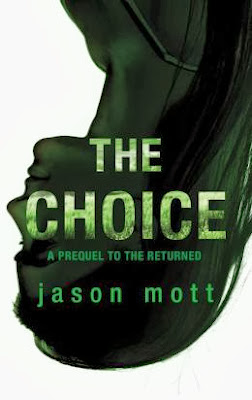 In this short story by Jason Mott, author of The Returned, a man is forced to choose between the life he has now, and the one he thought was gone forever…

Peter Galvin was just seventeen when Tracy Whitmore—the love of his life—vanished without a trace. In the years after her death, he had finally moved on, gotten married, started a family. He is content with his life now—happy, even…. Until Tracy suddenly and inexplicably returns.

For weeks, Peter and his wife, Samantha, have been watching mysterious reports of people's loved ones returning from beyond, the world spinning into uncertainty and chaos. But they never imagined it would happen to them. With Tracy's unusual homecoming, Peter and Samantha must decide where they can possibly go from here, and whether their family can survive…

Read more stories of the Returned in The First and The Sparrow. And don't miss Jason Mott's haunting debut novel, The Returned, a story of one family given an extraordinary second chance.

Review:
The Choice is the last of the three short story prequels to Jason Mott's debut novel The Returned, these stories are currently all available for free on Amazon and other ebook stores (I don't know if this will change in the future) and are a nice introduction to the world that the author has created. The novel already has a lot of hype surrounding it and has even been picked up by Brad Pitt's production company to be turned into a TV series so I was very curious to try these prequels.

Peter was seventeen when his first love, Tracy, disappeared. No body was ever found but when she never returned it was assumed that she had died. Years later Peter has moved on with his life, he is married and is happy with his wife and daughter. Then Tracy mysteriously returns and Peter must decide if his future is with his wife Samantha or with Tracy.

I have to admit that I didn't enjoy this story much, more because it hits on some of my personal hot buttons than due to a problem with the actual story but it is impossible for me to say exactly why I didn't like it without giving spoilers. To keep it brief I'll just say that didn't like the way Samantha had been portrayed, it felt like certain actions were just included to justify anything that Peter may or may not choose to do. I also found it extremely creepy that Peter was so obsessed with Tracy when he was almost twice her age and I didn't like the way Tracy's family kept so many secrets from her. This story did still raise some interesting questions though and I don't think everyone will have as much of a problem with it as I did. Like the other prequels this is very short (less than 30 pages) and since it's free I'd say it's definitely worth giving it a try. You're probably better off reading the prequels in order though: The First, The Sparrow and then The Choice. These prequels have definitely whet my appetite and I'm looking forward to reading The Returned.