To celebrate today's release of Bold Tricks, the final book in Karina Halle's fabulous Artists trilogy, I'm thrilled to have an extract of the book to share with you today along with a wonderful giveaway. I only recently discovered this series and I was absolutely hooked from the moment I picked up On Every Street. I have devoured the whole series (my review of Bold Tricks will be up later today) and I can't recommend these books highly enough! You do need to read these books in order though so if you're new to the series I'd recommend skipping the blurb and extract below and going straight to the giveaway at the bottom of the page. You can read my reviews of the earlier books by clicking these links: On Every Street, Sins & Needles & Shooting Scars. 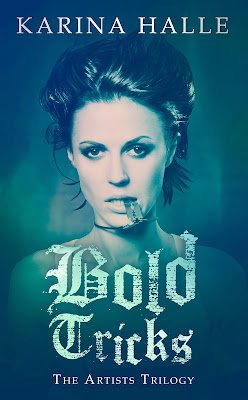 The Faster They Live, the Harder They Fall . . .

Raised by con artists, Ellie Watt has a lot of crazy childhood memories-but none crazier than being scarred with acid by the demented crime boss Travis Raines. Now Ellie is a full-grown woman who lives for revenge, and Travis is a full-blown drug lord who kills for pleasure. The sadistic bastard has kidnapped her good friend Gus as well as her mother, whom he's been holding as prized possessions in his heavily guarded lair. And Ellie has only one chance in hell of getting them out alive-using two dangerous men who love her to death . . .

One is Camden McQueen, a talented tattoo artist who's made a permanent mark on Ellie's heart. The other is Javier Bernal, her fiery ex-lover who's busted more than a few heads in his time. From the crime-ridden streets of Mexico City to the predatory jungles of Honduras, this unlikely trio forms an uneasy alliance in the deadliest game of all-a gun-blazing battle to the finish that will pit enemy against enemy and lover against lover. And Ellie must choose the right man to trust . . . or die. 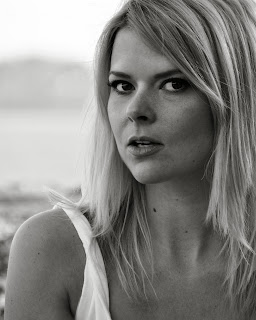 Author Bio:
The daughter of a Norwegian Viking and a Finnish Moomin, Karina Halle grew up in Vancouver, Canada with trolls and eternal darkness on the brain. This soon turned into a love of all things that go bump in the night and a rather sadistic appreciation for freaking people out. Like many of the flawed characters she writes, Karina never knew where to find herself and has dabbled in acting, make-up artistry, film production, screenwriting, photography, travel writing and music journalism. She eventually found herself in the pages of the very novels she wrote (if only she had looked there to begin with).

Karina holds a screenwriting degree from Vancouver Film School and a Bachelor of Journalism from TRU. Her travel writing, music reviews/interviews and photography have appeared in publications such as Consequence of Sound, Mxdwn and GoNomad Travel Guides. She currently splits her time between her apartment in downtown Vancouver and her sailboat, where a book and a bottle of wine are always at hand. She’s hard at work on her next novel.

Ugh. Sharing a room with Javier would be a nightmare at this point, but Camden did have a point. I didn’t trust Javier and knew he was capable of screwing us over at the first opportunity. Staying in separate bedrooms this early in the game would be the perfect opportunity for him to up and leave us. Javier’s alliance only extended to his sister, not to Gus, and the fact that he was even agreeing to help us at all said a lot. Unfortunately, I didn’t know exactly what it said.

“I’m staying with you,” I quickly said to Javier. I didn’t bother putting on an act, smiling or acting coy. He’d see straight through me anyway. He always did.

He raised his brow. “Is that right, angel? And to what do I owe your angelic company?”

“Because you’re both the same,” Camden filled in. He stepped forward and quickly swiped a key out of Javier’s hand. “You’re meant for each other.” He took off for his room, his back straight and proud. My heart both lurched and ached at his words, how badly he was brushing me off, how I’ll he thought of me.

Javier was surprised and loving it. He turned to me, mouth slightly agape. “Wow. Something tells me he was trying to be insulting.”

I couldn’t even fake a smile. “Which one is our room?” I asked, feeling sick as the words came out.

He grinned at me, all snake, no conscience. “Whichever one I choose, angel. Have you got all your belongings?”

Normally I would have brought out everything from the trunk, but there were an awful lot of lives in there, an awful lot of stuff. With me keeping an eye on Javier all night, it was probably safe.

He smiled again, especially as Camden shut the door to room number one.

“Let’s take numero tres, sí?” Javier asked. “More privacy.” He grabbed my hand and led me toward it, though there was nothing gentle or warm in his touch. Just like that, those days were over. I was back to dealing with the spurned Javier, the hunter and the sadist.

He opened the door and flicked on the lights. A few cockroaches skittered underneath the bed, and moths darted to the threadbare light fixture hanging from the ceiling. The room was as run-down as I’d ever seen, and for one twisted second I was glad I wasn’t sleeping there alone. In the next second, though, I was reminded that the company of insects was preferable to his.

He closed the door behind us and put his hand at my neck, holding me there, and leaned into my ear. “Do you want top or bottom?”

I stiffened for a moment then rammed my elbow back into his gut. “Fuck you.”

He let go of me and coughed loudly, still trying to smile. “You should be glad I’m giving you the option, angel.”

He straightened up and shrugged. “It’s what you liked until about, oh, twelve hours ago. Tell me, angel, what is it about that boy that makes you forget who you really are? Is it the tattoos, because you know I have those.” He quickly shed his linen shirt and stood bare-chested before me, the tattoo of his mother’s name on his inner arm. He turned around slowly, making sure I saw the large cross going down his spine. “Or is it those horrible glasses of his? You know, I can look like a fucking idiot if I really wanted to.”

I narrowed my eyes, keeping far away from him like wary prey. “He sees the good in me.”

He laughed. “The good. Of course. The good. So, is that why you’re spending the night with me? Because I looked into that boy’s eyes tonight and there was no good in there left for you.”

My gaze locked with his, a war without further words. His eyes shone yellow-green in the light, looking more inhuman by the moment. Deep in his insanity, he was making some sense. That’s what I hated most about Javier, that there was always a kernel of truth to his words, a truth that made you fall for the lies.

I sucked back my breath and nodded at the sagging bed. “You better get a good night’s sleep.” Then I grabbed one of the pillows and the top sheet and brought it over to the thin Mexican rug that ran along the foot of it.

“You’re serious?” he asked as I started making my bed on the floor.

“Good night,” I told him, lying down on top of the sheet. I didn’t trust the cleanliness of the floor and it was too hot to have a sheet on top of me anyway. I rolled over so I was facing away from him. He was still standing near the bed.

“Come now,” Javier said. “Sharing a bed with me isn’t that bad. You’ve been doing it for the last week. Is the inevitable sex too distracting?”

I ground my teeth together but didn’t say a word.

Suddenly he dropped to the ground on top of me, flipping me over so I was on my back, pinning both of my arms to the ground, his face just inches from mine. Wild strands of his hair partially obscured his feverish eyes.

“I’ll scream,” I said hoarsely, fear pulsing through my veins.

He grinned. “You know I love that.”

You can enter using the rafflecopter form below. Winners will be chosen and announced by Grand Central Publishing and they will contact the winners directly to arrange sending out the prizes.