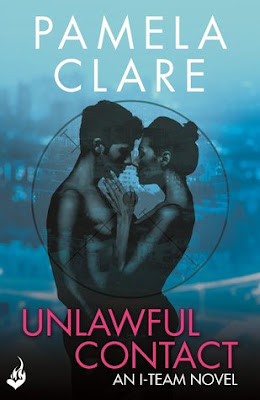 Taken hostage by a convicted murderer while reporting at a prison, Sophie Alton has no idea that the man holding the gun to her head is the bad boy who was her first love in high school.

Condemned to life without parole, Marc Hunter finds himself with no choice but to break out of prison after his younger sister disappears with her baby. Though he regrets what he has to put Sophie through, he can't let anything get in the way of stopping the corrupt officials who are set on destroying what's left of his family.

But being forced together rekindles memories for each of them. And, as the passion between them heats up, so does the conspiracy to put both of them in their graves . . .

Review:
I have become a huge fan of Pamela Clare since I started reading her I-Team stories and even though I'm only three books in it's now become one of my favourite series. Every time I think the books can't possibly get better she proves me wrong and Unlawful Contact was definitely the best one yet. I was hooked in by the incredibly sweet prologue that introduces us to the teenage versions of Marc and Sophie. They shared one special night together before Marc left their home town to join the army and although they never kept in contact neither of them ever forgot the time they had together.

Now, 12 years later Sophie is working as an investigative reporter and she's incredibly worried when one of her contacts, a recovering drug addict who she has been working with for months, disappears with her baby daughter. Sophie is sure that Megan wouldn't have started taking drugs again, not when she was so close to getting her baby back, and she is determined to find out what is really going on. When she is offered the chance to interview Megan's brother who is currently serving life in prison for murder, she has no idea that the person she is going to see is the boy who stole her heart all those years ago. Marc gave up everything to keep his sister safe and he knows there is more to her disappearance than meets the eye so he will do whatever it takes to get out of prison and search for her, even if that does mean taking the girl he once loved hostage.

What follows is an edge of your seat thrill ride that had me desperately turning the pages trying to find out what would happen. I fell hard for Marc, even though he was a convicted murderer, and I have absolutely no doubt that if I was in his position I would have done exactly the same thing that he did. Sophie and Marc have history but she doesn't immediately fall for his charms, she doesn't take his word for things and does her own investigation into his past. She can see that things don't add up and when he saves her life more than once she starts to realise that there is a lot more going on that meets the eye. I was sceptical about this romance before I started reading it - I mean how was I supposed to get on board with a hero who literally kidnaps the heroine at gunpoint within the first couple of chapters? - but I was incredibly impressed that Pamela Clare not only convinced me but had me completely rooting for them as a couple. Marc and Sophie were perfect for each other and their romance was sweet, hot and sexy as hell. Marc is a genuinely good guy, he always puts other people first and he will stand up for the people he loves no matter what it costs him. I had my suspicions about a certain thing from fairly early on but even if I'd been proved wrong I would still have been 100% behind Marc and his actions.

This series tackles some very difficult subjects that can make for uncomfortable reading at times - we've had big businesses trying to hide the environmental damage they are causing, political corruption, human trafficking and slavery and now we get a look at prison corruption and drug dealing - but it is always done in an incredibly informative way and it's obvious the author has a great deal of knowledge about these issues. In spite of the darkness to these stories she is also incredibly good at infusing some light hearted humour and fantastic romances. This series really is a perfect example of what good romantic suspense is all about and I can't wait to carry on reading it.