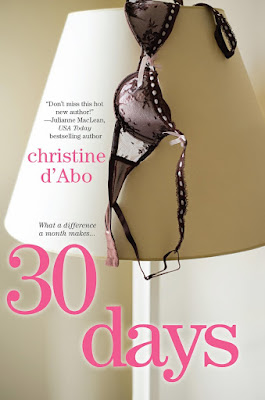 For years, Alyssa has been going to bed with a memory. Is she ready to wake up with a fantasy?

Some people wait their whole lives to find their soul mate, but not Alyssa Barrow. She met Rob at nineteen, and they were set to live happily ever after—until he became ill. In his final days, Rob urged his beautiful, young wife not to abandon happiness—or pleasure. He even left her a special gift, a sexy game plan to help her move on: Thirty cards with instructions for thirty days of passion. You’ll know when the time is right, he’d said. Now it’s two years later, and when Alyssa meets her hot new neighbor, Harrison Kemp, she begins to think the right time is right now . . .

From his sculpted thighs to his devilish grin, Harrison is the kind of man women want. Before she can lose her nerve, Alyssa tells Harrison about her long-ignored cards…and asks him to help her fulfill them. It’s a favor he’s more than happy to, um, perform. With his skillful touch, and the hot press of his lips against her skin, Alyssa finds herself re-awakening to life—and a host of other sensations. But what began as not-so-innocent fun soon grows into true intimacy, and Alyssa realizes she’s opening herself up not just to sex . . . but to love. When it comes to a future with Harrison, what’s really in the cards?

Saucy, heartwarming, and insightful, 30 Days explores the agony—and the ecstasy—of starting over, and how a little encouragement, and a little courage, can go a long way . . .

Review:
Alyssa already had what she thought would be her happily ever after, she married her first love and they were incredibly happy together until her husband, Rob, became ill. Knowing he was dying Rob made Alyssa promise that when she was ready she would move on and find happiness with someone else. Alyssa was sure she would never be able to get past Rob's death but now two years on she is finally starting to feel like she could move on with her life, she'll never forget Rob but she doesn't want to be alone forever either. Rob left Alyssa a letter for when she was ready and when she discovers it contains 30 cards with sexy instructions to help build her confidence she just needs to find someone to test them out with. Then Harrison moves into her apartment complex on a short term lease and she realises he's perfect, not only is he completely gorgeous but he'll be gone in three months so she doesn't have to risk getting her heart involved in a rebound relationship.

30 Days was a beautiful, heartfelt story that shows it is possible to move on with your life even after suffering the most terrible tragedy. It was obvious how much Alyssa had loved Rob and how hard she found even the thought of moving on but at the same time she deserved to find happiness again and I enjoyed seeing her come out of her shell both emotionally and sexually. She was obviously very young and inexperienced when she met Rob and it seemed like even though they were best friends and very compatible they never had enough time to fully explore each other sexually. Rob wanted Alyssa to be able to push her boundaries and find out what she really enjoys and the cards were his way of helping her move on. At first I thought it would be a bit weird having Rob's presence in her current relationship in the form of the cards but it was actually handled really well and I think Alyssa found Rob's continued support rather comforting.

Harrison was a great character too, he was obviously more than happy to let Alyssa experiment on him and I enjoyed the fun banter between the couple. He had his own secrets and reasons for keeping Alyssa at arms length and I would really have loved to be able to get inside his head and see exactly why he reacted the way he did sometimes. I think that would have helped me connect with them as a couple even more but even without it I still thought they fit well together and I believed that they would make a good couple. Christine d'Abo always writes great sex scenes and she didn't disappoint me here, 30 Days was a sweet and emotional story but it was also funny and hot as hell. The cards certainly gave me a few ideas that I'd like to try out in the future!