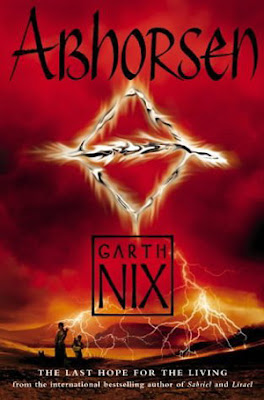 When the ninth gate calls, who can resist its summons?

An old evil has arisen - freed from its subterranean prison and seeking to escape the binding silver hemispheres which prevent it from finally unleashing its terrible powers.

Lirael, newly come into her inheritance as the Abhorsen-in-Waiting, knows that the fate of the world is in her hands. With only a vision from the Clayr to guide her, and the uncertain help of her companions — Sam, the Disreputable Dog, and Mogget — Lirael sets out on her perilous mission.

Then answer must be found somewhere in Life or Death - but can a former Second Assistant Librarian possibly discover the means to defeat the Destroyer . . . before it is too late?

Review:
This series just gets better with every reread, I've actually lost count of how many times I've read these books over the years but the Old Kingdom trilogy will always have a special place in my heart and I'm excited that Garth Nix has decided to revisit the world again with Clariel. Before I start the new book I wanted to reread the original books again though and Abhorsen was just as fantastic as I remembered it being. It picks up the story almost immediately after the ending of the last book so Lirael and Sam are fighting against the clock to stop the necromancer Hedge from releasing an ancient and terrible power into the world. The fate of the entire kingdom is in their hands and with Sabriel and Touchstone across the wall in Ancelstierre Lirael and Sam only have the Disreputable Dog and Mogget to help them.

The world building in this series is phenomenal, I love the river of death with the various gates and the way that necromancers are able to use the seven different bells to control spirits and move make them move through the gates. The bells are just as dangerous to the person ringing them though and wielding their power tends to corrupt the necromancers who use them. The Abhorsens aren't like most necromancers because they use the bells in a different way but they are in just as much danger when they step into the river. I love how Garth Nix describes the river, the gates and the creatures that roam there, he's great at writing creepy scenes and makes it incredibly easy to picture what is happening.

The previous book had a lot of set up but here we get to see exactly what is going on with Nick and how he was tricked into helping Hedge. The free magic is having a huge impact on Nick and even though he suspects something is wrong he can't quite seem to focus long enough to figure out what is happening to him. This story starts with a bang and the tension continues to build until the explosive climax when our heroes are in for the fight of their lives. I don't really want to say too much about the plot so I'm going to focus more on the characters here. Lirael has really come into her own since she learnt about her true heritage, she is doing a lot of learning on the fly but she is determined to do whatever it takes to stop Hedge from achieving his goals. Sam has also done a lot of growing up and now he isn't under pressure as the Abhorsen in waiting he is able to get past his fears and find his own way to help Lirael. the Disreputable Dog and Mogget remain two of my favourite characters, they're just so much fun and I always enjoy the banter between them, they're also both incredibly powerful in their own right and here they have to decide how they're going to use that power.

Abhorsen was a brilliant conclusion to the original trilogy but I'm excited to revisit this world and meet a whole new set of characters in Clariel. This is one of my favourite YA fantasy series and that hasn't changed since it was first published over 10 years ago!