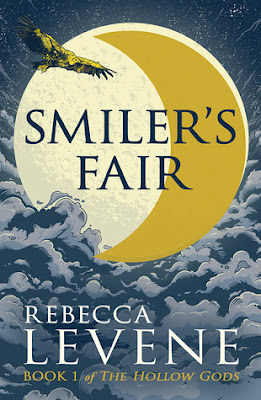 Yron the moon god died, but now he's reborn in the false king's son. His human father wanted to kill him, but his mother sacrificed her life to save him. He'll return one day to claim his birthright. He'll change your life.

Smiler's Fair: the great moving carnival where any pleasure can be had, if you're willing to pay the price. They say all paths cross at Smiler's Fair. They say it'll change your life. For five people, Smiler's Fair will change everything.

In a land where unimaginable horror lurks in the shadows, where the very sun and moon are at war, five people - Nethmi, the orphaned daughter of a murdered nobleman, who in desperation commits an act that will haunt her forever. Dae Hyo, the skilled warrior, who discovers that a lifetime of bravery cannot make up for a single mistake. Eric, who follows his heart only to find that love exacts a terrible price. Marvan, the master swordsman, who takes more pleasure from killing than he should. And Krish, the humble goatherd, with a destiny he hardly understands and can never accept - will discover just how much Smiler's Fair changes everything.

Review:
Smiler's Fair was a fantastic start to a new series from British author Rebecca Levene and it left me desperate to dive straight into the next book The Hunter's Kind. This is the best kind of fantasy, one with rich world building, interesting mythology, a fantastic range of characters and plenty of secrets to keep you guessing.

Hundreds of years ago the moon god fought with the sun goddess and lost, after his death his servants fled underground and have since turned into monstrous creatures who will murder anyone they come across. The people above ground live in fear of the worm men and have had to adapt their way of life to try and avoid them. Staying in one place for too long draws the monster's attention so the wealthiest noble families live in huge floating homes built on lakes while villagers build their homes on wheels so they can keep them moving. Then there is Smiler's Fair, a huge travelling fair that is home to hundreds of people and has everything you could possibly wish for inside it's walls. The fair travels across the land only stopping for short periods of time before moving on at the first hint of trouble and a lot of our central characters cross paths with the fair at some point during the story.

I don't really want to say much about the plot because this is the kind of book you should really discover for yourselves but I'll give you a little hint about some of the characters. The book is told from multiple points of view and I loved getting to see so much of the land through different eyes. First you have Krish, a goatherd whose live is turned upside down when he finds out he is at the centre of a prophecy, then there is Nethmi, a young princess who is forced into marriage with a man old enough to be her father, Eric a boy who makes a terrible mistake by falling in love with the wrong person and Dae Hyo a warrior without a home who is searching for revenge. You'll meet plenty of others too, some you'll love, some you'll hate, ones who will impress you with their strength and integrity and others who will shock you by their epic betrayals.

Smiler's Fair is mostly character driven, there is a lot of world building and a huge amount of set up for the rest of the series so in some ways you could say that not a lot actually happens but I still enjoyed every minute of it. The mythology was interesting and richly developed, the characters all have strong personalities and love them or hate them you'll find yourself desperate to see what they do next and I am definitely invested enough to put the rest of the series at the top of my to be read pile. I can't wait to see what Rebecca Levene puts her characters through next.