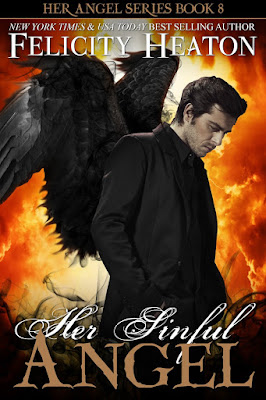 Cast out of Heaven and now the king of Hell, Lucifer is a powerful fallen angel warrior with a heart as cold as ice and soul as black as the bottomless pit. For millennia, he has ruled his realm with an iron fist as he plots the demise of his ancient enemies. When one of those enemies dumps an unconscious mortal female in the courtyard of his fortress and leaves her there, Lucifer finds himself entranced by the beguiling beauty and tempted beyond all reason. But is the enchanting Nina an innocent pawn in the eternal game or part of a plot against him?

Also available as part of the Dark and Damaged Boxed Set

Review:
Her Sinful Angel is a nice bonus story in a series that I thought had already finished, it was actually really great to revisit this world and see a couple of the previous characters. It's a shame we didn't have the chance to catch up with all the couples but I actually liked how the story stuck closely to the main characters so I'm not going to complain about that. This story was previously published in the Dark and Damaged Box Set and is now available as a stand alone ebook.

I have to admit I never really saw Satan as a romance hero, especially not in a series where we've seen him do such horrible things, but in the last few books our Lucifer has started to show a softer side to him, especially where his daughter and grandson are concerned. I was very curious to see how Felicity Heaton would redeem him and I was actually pleasantly surprised that she didn't try to gloss over his past or the bad things he has done. Lucifer was betrayed and tricked into becoming a fallen angel, he is bitter because of this and he has made it his life's work to reek revenge on heaven's angels. We've seen before in this series that nothing is black and white and that both heaven and hell are made up of all sorts of grey areas and that definitely continues to be the case here. Lucifer certainly hasn't suddenly turned "good" just because he's met the woman of his dreams. He's still capable of committing atrocities but I was able to completely believe that he would never hurt Nina or his family.

Nina was an interesting character because she knew nothing of the supernatural until the day she was kidnapped by an angel and rescued by the devil. This is all very new to her and it takes her a while to accept what has happened to her but she is very loyal to those she cares about and she's smart enough to make decisions based on what she's seen rather than listen to what other people tell her. The romance does develop very quickly, as it has with the rest of the series, but somehow Felicity Heaton always manages to pull it off without making me feel uncomfortable. I found myself thoroughly enjoying Her Sinful Angel and kind of hoping that we're going to see more of Lucifer and all the other angels from this series.