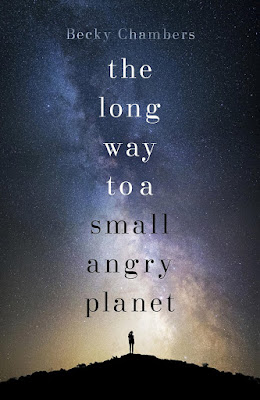 Somewhere within our crowded sky, Rosemary Harper has joined the crew of the Wayfarer, a patched-up ship that's seen better days. Rosemary is looking for a small, quiet spot to call home with adventure in far-off corners of the galaxy, and distance from her troubled past. She believes she has found this on the Wayfarer.

The crew is a mishmash of species and personalities, from Sissix, the friendly reptilian pilot, to Kizzy and Jenks, the constantly sparring engineers who keep the ship running. Life on board is chaotic, but more or less peaceful - exactly what Rosemary wants. That is until the crew are offered the job of a lifetime: the chance to build a hyperspace tunnel to a distant planet.

The job will earn them enough money to live comfortably for years . . . if they survive the long trip through war-torn interstellar space without endangering any of the fragile alliances that keep the galaxy peaceful.

It soon becomes clear Rosemary isn't the only person on board with secrets to hide. and the crew will soon discover that space may be vast, but spaceships are very small indeed.

Set against a backdrop of curious cultures and distant worlds, this episodic tale weaves together the adventures of its eclectic characters, each on a journey of their own.

Review:
Reading The Long Way to a Small, Angry Planet is a bit like diving into a series of a show like Star Trek or Firefly and I enjoyed every minute of it. The story is very character driven so the plot can be a little slow in places but I was having so much fun getting to know everyone and learning about the different alien cultures they come across along the way that this really didn't bother me. Most of the action is towards the end of the story though as they get closer to their destination and that's when I was completely on the edge of my seat waiting to see how things would turn out.

This is the story of the Wayfarer, a small ship that tunnels wormholes through the galaxy to make long distance space travel much easier. Their latest job has the potential to make the crew rich but the journey will be long and tedious and they're flying into a war zone so the potential dangers are high. The Wayfarer's crew is small and relatively tight nit, but even the closest friends can start to wear on each other after spending a long time trapped together in a relatively small space. There are nine members of crew who come from a variety of backgrounds spanning across both human and alien races. They even have an AI on board who is just as sentient as the rest of the crew.

Rosemary, the newest human crew member and the ship's clerk, is looking to escape from her past and just wants to get as far away from her home on Mars as possible. Captain Ashby is also human but he was born in space and just loves to travel, his ship is everything to him and he cares deeply about his crew. Pilot Sissex comes from a lizard like alien race who have very different customs to our own while Dr Chef, another alien, wants to live in peace away from his war torn home world. The two ships engineers, Kizzy and Jenks, are both a little on the crazy side and fight like brother and sister while AI Lovey watches over the ship and her friends to protect them from danger. The final members of the crew are navigator Ohan, a complicated symbiotic pairing with a very different outlook on the world, and algaeist Corbin who is in charge of fuel production.

Each of the characters get to tell part of the story which really allows us to get to know them all, they are all unique but sometimes flawed individuals with their own quirks and interests and I really grew to love them. The interactions between the various crew members were fantastic and I enjoyed seeing how various relationships changed throughout the course of the story. The universe Becky Chambers has created is fully fleshed out and full of intricate details, she has some brilliant settings and we get to meet a lot of interesting alien races along the way. Each species introduced has it's own customs and eccentricities that really helped bring them to life. Although The Long Way to a Small, Angry Planet works perfectly as a stand alone story I can't help hoping that we'll get a chance to meet up with the Wayfarer again to join the crew on another adventure.