Review: My Life as a White Trash Zombie - Diana Rowland 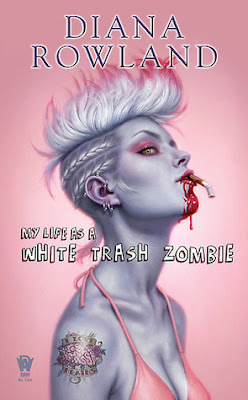 Angel Crawford is a loser.

Living with her alcoholic deadbeat dad in the swamps of southern Louisiana, she's a high school dropout with a pill habit and a criminal record who's been fired from more crap jobs than she can count. Now on probation for a felony, it seems that Angel will never pull herself out of the downward spiral her life has taken.

That is, until the day she wakes up in the ER after overdosing on painkillers. Angel remembers being in an horrible car crash, but she doesn't have a mark on her. To add to the weirdness, she receives an anonymous letter telling her there's a job waiting for her at the parish morgue—and that it's an offer she doesn't dare refuse.

Before she knows it she's dealing with a huge crush on a certain hunky deputy and a brand new addiction: an overpowering craving for brains. Plus, her morgue is filling up with the victims of a serial killer who decapitates his prey—just when she's hungriest!

Angel's going to have to grow up fast if she wants to keep this job and stay in one piece. Because if she doesn't, she's dead meat.

Review:
Angel Crawford is a high school drop out with a deadbeat boyfriend, no job and addiction to drugs and alcohol. Her life is going nowhere fast - until the day she actually dies. Angel remembers a car crash, she remembers fear and blood but not a lot else so she's confused when she wakes up in hospital without a scratch on her. The doctors think she took an overdose but she's sure that's not what happened. Things get weirder when she suddenly finds a job has been organised for her to work with the coroner, she didn't apply for it and she has no idea why she's been given a second chance. She isn't going to look a gift horse in the mouth though and she takes the chance to finally make something of herself and runs with it. It turns out that Angel is quite suited to working with dead bodies, if only she could rid herself of the pesky little desire to chow down on their brains. What's a girl to do when she realises she's turned into a zombie?

I really wasn't too sure what to expect from this story, zombie books don't usually make it onto my to read pile because I'm pretty squeamish & I'm not much of a horror reader these days, but that cover caught my eye and then a bunch of my friends decided to buddy read it so I thought I'd give it a go. I'm so glad I did because I had so much fun reading this story. It's pretty damn gory, in fact there were times when I was almost struggling to hold down my lunch while I was reading it (hey, I told you I'm squeamish!), but the story had sucked me in so completely that I couldn't put it down.

Angel is a loser with a capital L, she comes from a white trash family, her mother had mental health problems and her father is an abusive alcoholic who is more interested in how much money Angel can give him for beer than he is in her welfare. Life hasn't been kind to her and she's pretty much given up on ever finding something better for herself so it comes as a complete shock to her when someone decides to give her a break and arranges for a decent job for her. She's convinced it must be something to do with her parole and since she doesn't want to go to jail she decides she'll do whatever it takes not to mess up. I loved seeing her turn things around, underneath her brash exterior she's actually smart and capable and now that she's set her mind to it she is able to use her brain to her advantage. Life is still hard but she has so much she wants to live for and if that means doing something as gross as eating brains she's going to find a way to deal with it.

I loved Diana Rowland's unique take on zombies, I don't want to say too much about it so you'll have to read the book to find out more but they definitely aren't your typical mindless, murdering beasts who will rip you to pieces on sight. The story alternated between grossing me out and making me snort with laughter and I can't wait to carry on reading the series. It's so nice when a book surprises you, My Life as a White Trash Zombie took me way out of my comfort zone and I loved every minute of it.