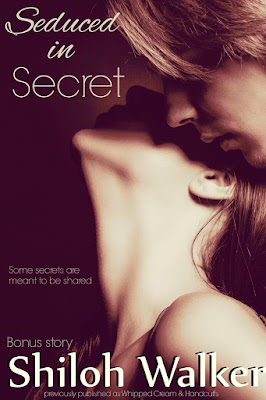 Life laid out, Tessa had everything set. Engaged to marry the perfect man, a rich, great-looking doctor, she was content with her life, or so she thought. Then the gift arrived. Delivered to her office on Valentine’s Day, it was filled with handcuffs, sexy little toys and a suggestive little card.

It wasn’t from her fiancé, either.

When the emails and the phone started coming, she should have been able to brush them off, except the man said something that left her uneasy…and not because he scared her, but because he was right. Your fiancé will never make you happy, Tessa.

Confused, she starts looking at her fiancé, her life…and other things…in a whole new light. One of the things she finds herself considering is her best friend and neighbor, Caleb. He’s always been there. Even when he spent years in the Navy, Caleb was the one she could count on and now isn’t any different. He’s there to listen when she needs an ear and he’s got nice, strong shoulders when she needs one to lean on.

It doesn’t her long to realize that one thing is certain—her fiancé can’t make her happy. But now she doesn’t know whether she wants to take a chance on her sexy secret admirer…or Caleb, the man who’s been there waiting for her all along.

It includes a short bonus story called Don't Walk Away.

Seduced in Secret was previously published as Whipped Cream and Handcuffs. It has been extensively rewritten, revised and expanded.

Review:
Seduced in Secret was originally published with the title Whipped Cream and Handcuffs but the story has been revised and expanded before being published again with a new name. Having never read the original version I can't compare the two so this review is purely for the new version of the story.

Tessa's life is going completely to plan, she likes her job, she loves her home and she's engaged to the perfect man. Well, he's the perfect man on paper anyway even if he is a little over controlling. Everything is great until she starts receiving messages and gifts from a secret admirer and they make her start to think about all the things she is missing out on. She quickly realises that man sending the messages is right - her fiancé will never make her happy - but does she take a chance on meeting up with a stranger or should she risk action on the attraction she feels for her best friend Caleb, the one man who has always been there for her?

I really love the friends to lovers trope so I knew from the blurb that I was going to enjoy Seduced in Secret. Caleb has had feelings for Tessa for as long as he can remember but she placed him in the friend box a long time ago and he's never managed to break out of it. He's spent years working overseas in the Navy but Tessa has always been the woman he dreamed of coming home to and now that he's been medically retired he is determined to make his move. It was easy to fall for Caleb, he was such a sweetheart and he obviously knows everything there is to know about Tessa and what she needs to be happy. I loved seeing the strong bond of friendship between them as well as the obvious physical attraction, they make a really cute couple and it was easy to root for them. The secret Caleb was keeping was very amusing although I didn't blame Tessa for being a bit upset when she realised what was going on. My only problem was that the story ended a bit too abruptly, I think it would have been even better if it had been extended by a couple more chapters.

This book also includes a bonus short story called Don't Walk Away, this was a second chance love story between a couple with a complicated history. It was a nice bonus but was a bit too short for me to really connect with either of the characters. I would have much preferred to skip this for an extra couple of chapters of Seduced in Secret.