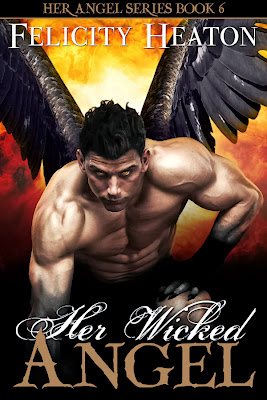 The King of Demons and the Devil’s right hand man, Asmodeus is a dark angel born of evil and created for destruction. When his master orders him to venture into the mortal world and retrieve a female for him, he seizes the chance to leave Hell for the first time, uncaring of what the Devil has planned for her… until he sets eyes on the most beautiful woman he has ever seen—a female who awakens new feelings within his black heart, unleashing passion so intense that it controls him and desire he cannot resist.

He will not let his wretched master have her. She will belong to him.

Liora is a witch with a bad reputation and an obsession with fighting demons. A mission gone wrong sees her sent to Paris to cool off, but when a dark and deadly warrior with a gaze of golden fire lands in her life, she ends up burning hotter than Hell for the wicked angel. Nothing will stand between her and the immense, forbidding male. Not her cousin. Not Asmodeus’s sworn enemy and twin, Apollyon. And certainly not the Devil.

Caught up in a tempest of danger and soul-searing passion, can they survive against the odds and seize their forever after?

Review:
I'm a huge fan of Felicity Heaton's Her Angel series so the last year has been a very long wait for Her Wicked Angel. The revelations in Her Demonic Angel were sure to have a larger impact on the series so it shouldn't come as any surprise to hear that most of the previous couples have an important role to play in this story. It was great to catch up with some of my favourites and see how they're getting on now and I was pleased with the way they stood by Liora when she needed their help and that they were eventually able to trust and accept Asmodeus.

We have briefly come across Asmodeus before - he's Apollyon's evil twin - and I was a little worried about how the author would be able to redeem someone who has done such horrific things but I have to say it didn't take long for me to fall for him and I think he's now taken the top spot as my favourite hero in the series! Asmodeus is unapologetically a badass, known as the King of Demons he has done terrible things as the devil's right hand man and he doesn't try to hide that fact. He isn't completely evil though, there is a tiny spark of good deep inside him but he has been raised in an environment where any sign of good is a sign of weakness so he has spent thousands of years trying to suppress his conscience. Liora is the first person to see through that tough man persona he puts on and she is the only person who has ever tried to encourage his good side. She makes him want to be a better man and although he'll always have a dark side when he's with her he is sweet, caring and very protective. I loved how we're shown that the good has always been there though and I enjoyed watching him learn how to interact with others after he has spent so much of his life alone.

Liora was the perfect heroine for Asmodeus, she is a kind and loving woman but she also has a bit of a wicked side. She is able to understand his darker moods because she hasn't always led a perfect life and she knows all about making mistakes and the lengths that revenge will take you to. There was one moment towards the end of the book where I found myself really annoyed with her for judging Asmodeus when she'd been so willing to accept him for who he was before that but I was able to forgive her for that because of how bad she felt when she realised how much she'd hurt him. Together they make a great couple and they had superb chemistry. Without a doubt Her Wicked Angel contains some of the hottest sex scenes in the series! For someone who was so shy in the beginning of the book Asmodeus is certainly a fast learner.

Alongside the incredibly hot romance this story is packed with action and some fantastic twists and turns. You'll see appearances from unexpected friends and old enemies and the build up to what is sure to be an epic battle in the next book. I have a suspicion that Nevar might be the next hero and if he is it'll be really interesting to see if he can come to terms with the changes that have taken place in himself over the last couple of books. Whoever the next couple turns out to be the next book will definitely be at the top of my wish list though and I can't wait to continue with this series!